Behind the Lens: How I edit that shot, Seascapes

A lot of people wonder if the images I take actually looked like that in person.  And it's a very valid question given the current capabilities of programs like Photoshop.  For me, it's not about taking out crucial elements of the image, or superimposing things that weren't there... it's about injecting some life back into the image and overcoming the limitations of the camera.  Image editing is just one more completely necessary step in today's photography.  It used to be gel filters and hours of darkroom manipulations, now it's Lightroom and Photoshop!
There are so many times when the camera just didn't capture the same brightness, vibrance and allure that I witnessed first hand.  But through the wonders of digital editing I can put the magic back into the photographs that lost a bit of lustre on their way through the lens.
So here are two examples of seascapes I've taken and the steps necessary to put some oomph back into the pictures.  First is a seascape from Green Hill taken at dusk, which didn't need much work.  And second is one from King's Beach in Newport, which needed a lot of help and fine tuning.  Again, these images were edited only to bring out the true nature of the scene that I experienced when I captured them.
For Green Hill, the first step was to make my standard Lightroom adjustments.  For me, this mostly includes slight bumps in Brightness, Contrast, Blues and Greens, and a little bit of bending to the Tone Curve.  Not too much, just to get rid of those flat tones, bring depth to shadows, and recover anything that's too bright.  Next, it was Photoshop's turn for a quick removal of the vignette caused by my stacked filters.  This was quick and easy using Photoshop CS6's Content Aware Fill.  A little bit of healing, and those dark corners never existed!  Then back to Lightroom for the last look over... some darkening of the blown out sun, brightening of the rocks on the left side of the frame, and a very subtle vignette to help keep your attention inside the image and voila! 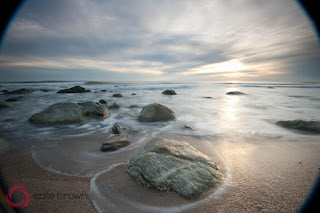 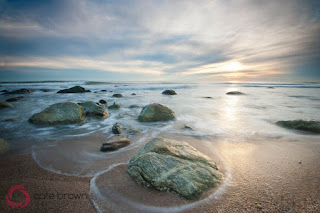 The next seascape took a little bit more work.  Our eyes actually perceive a greater dynamic range than our cameras.  The human eye is capable of over 20 stops of light, which is double what our cameras can see!  So when I was at this location in Newport and the sun was sinking below the horizon, I could see perfectly fine but my camera just didn't get the same level of brightness.  (And it appears I didn't have my exposure set quite right either!)  The picture came out too dark for my liking and all the wonderful colors were lost.

So I started with my usual step one Lightroom adjustments, except this time I had to bring up the exposure about 1.5 full stops!  This actually brightened up the sky to a point where all the beautiful colors were lost so I had to use a Graduated Filter tool to cover the sky down to the horizon, allowing me to darken the sky without affecting the rest of the photograph.  But the bit of pink that I could see in the original skyline was still barely visible, so I targeted the pinks and oranges using the HSL Panel in Lightroom to darken just those tones and boost their saturation.

Finally I was getting somewhere and things were starting to look the way they had in person!  Next came some minute adjustments to the tone curve to get that brightness level high enough but maintain some depth in the shadows so everything looked just right.  This image didn't need any Photoshop, but I did have a lot of dust specks on my filters from the shoot.  So I spent a solid 5-10 minutes just removing little specks of dirt that were most visible in the patternless sky. 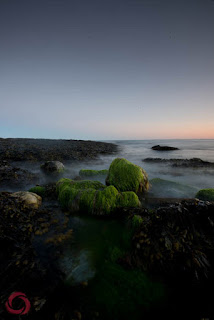 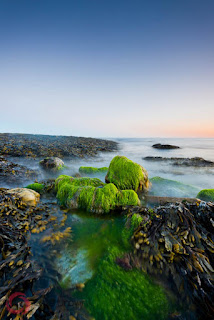 This final image may look rather dramatic compared to the original, but this is a perfect example of the camera not being able to perfectly capture what I experienced.  I'm not ever trying to give a false impression of a location, scene or experience, only to enhance what I saw when I was actually there photographing!
There is a lot of debate going on about how much image manipulation is acceptable.  For me, it's not about ignoring the digital age and the capabilities of Photoshop.  It's also not about disrespecting those who still choose to go 100% analog and avoid the digital manipulation altogether, or discrediting the artists who utilize heavy manipulations and abstractions for digital art.
But whatever your stance, I strongly believe you should do everything you can to get the shot in camera.  Photography happens in the camera first, and we shouldn't be tricking others or ourselves into thinking we're better photographers than we are.  And Photoshop shouldn't be an excuse for laziness in the field!
It's all about using the wonderful tools at our disposal.  The magic happens in the camera, what happens afterwards is just icing on the cake.  And we should always be aware of the power imagery has on viewers.  So in using our wonderful digital tools it's most important to use them responsibly.
At least, that's what image editing as a photographer is for me.