It took us a decent amount of time, about another 6 hours, to get from Cuttyhunk to Marion.  The breeze had been trying to fill from the Southeast all day but to no success.  We motored most of the way, and tried to sail for a little while before conceding defeat.
But as we came into Buzzard's Bay the littlest bit of breeze began to pick up to a comfortable 5+ knots and we put up the sail.  As we approached Marion we passed through a fleet of Herreshoff 12 1/2s racing just outside the harbor.  They had some of the most colorful spinnakers I had ever seen with patterns of stars, bright stripes, and all sorts of fun colors.  I love these little wooden day sailors for their simple and sleek design, always a classic! 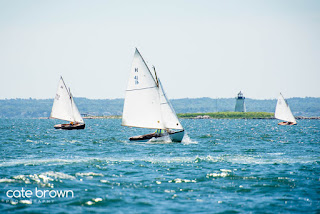 We only spent one day in Marion, swimming in the exceptionally warm waters in a secluded corner of the harbor.  Steak tip kabobs and a few cocktails later and you couldn't ask for a better way to spend a summer evening! 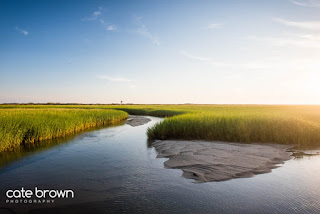 Our next port of call was the highlight of the cruise, requiring a long sail across Cape Cod Bay to the isolated but colorful Provincetown!  This little town has the charm of a historic Cape settlement with all the flair and pizzaz the Provincetown locals can possibly bring.  Always hospitable and always fun, we arrived in harbor after a long day crossing a rather empty Bay.  A long day shopping on land, and I packed my bags for what would prove to be a taxing hike to Wood End Lighthouse for sunset.
Wood End Lighthouse is located on the outer rim of the sand dunes that surround Provincetown and it's harbor.  One of three lighthouses, Wood End Light faces southeast, looking out across the bay, and is accessible by either walking long miles of beach or crossing the rocky jetty on the west end of the harbor.  I opted to cross the jetty, which looked more than doable, but it ended up taking the better part of an hour.  With daylight dwindling the 1.3 miles of jetty were difficult to navigate and every footfall had to be carefully placed.  While my initial plan was to walk the entire length of the jetty and get to the lighthouse with plenty of time for sunset, my time table had been turned upside down as it was taking me 20... 30... 45 minutes to walk the jetty.  I began stopping for only a minute at a time for a few shots as the light began to turn golden.  I knew if I reached the lighthouse my time would be extremely limited.  There was only about 45 minutes left before sunset and I still had a long way to go.

I made it to the end of the jetty and assessed the sand dunes, heavily covered with lush vegetation and not a soul in sight.  I had only a few minutes to navigate several hundred yards through the dunes to the lighthouse, and clouds were moving in over the horizon which meant the light would be disappearing sooner than expected.  I hitched up my backpack and made a break for it, going as quickly as I dared through the prickly bushes of beach rose.
Finally, I reached the lighthouse with 10 minute until sunset.  One quick walk around the area, I picked my shot, set up my tripod, and started shooting.  The light was fading fast and the clouds were going to be reflecting those beautiful sunset pinks in just a couple minutes.  I moved my setup to the other side of the lighthouse to face more north and the sky cooperated long enough for just one exposure of pink clouds.  Two minutes later and the sky had faded back to a dull periwinkle and the vibrance was gone as the sun dank behind the clouds. 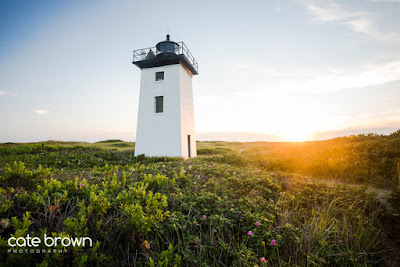 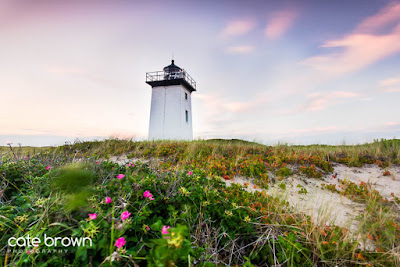 But my adventure wasn't over yet, as I quickly realized that I would have to make the 45 minute walk back across the jetty in the dark if I didn't hurry.  With no time to spare I packed everything up and started the walk back to the rock wall.  Luckily the tide had been going out which meant I could walk along the wet sand and mud along the edge of the dunes.  This made for a much more direct route back to the jetty and I was hoping that I could shave some more time off the return trip if I didn't stop to take any more pictures.  The sun was setting fast and was soon below the horizon as I started to climb along the rocks.
It did indeed take less time to cross the jetty back to town, only 30 minute this time, and as I climbed over the low wall to the street it was almost pitch dark out.  I missed the last shuttle bus by 10 minutes, I had seen it stop as I was walking back, and had to trek another couple miles through town to reach the launch back to the boat in harbor.  A three hour trip and about 6-7 miles later by my calculations and I was beat.  Hopefully the most epic photowalk of cruise had been worth it, but I wouldn't know for sure until I was able to download my camera card when I got back to Rhode Island. 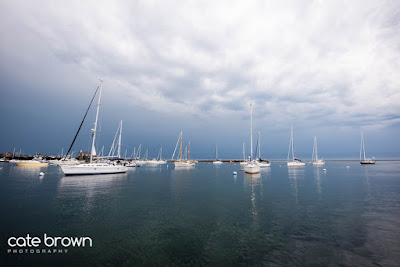 It was 7:00am the next morning when the most intense part of our journey occurred.  We woke up to an early morning phone call from a fellow cruiser, warning everyone in the fleet of a massive storm cell moving towards us.  We quickly battened down and secured all we could as the squall line approached. As my dad was throwing a second line on the mooring, he came down below to put on more foul weather gear and only a minute later a low groan could be heard across the harbor and you could see the wind hitting the water, leading the storm into Provincetown.  We had just enough time to get organized before the storm hit, and it hit hard.
The breeze picked up immediately from dead calm to 60 knots in a matter of seconds.  We would later learn that it was clocked at near 80 knots just down the cape from us in Wellfleet, and a possible microburst hit Rhode Island that same morning.  For us, we watched warily from under the bimini as moored boats swung side to side, some listing almost 20 degrees from the gale force winds.  Then, just as quickly as it had started, it all stopped.  The clouds continued to move out to sea and the rolling long clouds at the back end of the front could be seen over the town.  The morning sun broke through again and the harbor returned to a dead calm.  Luckily no one in Provincetown sustained much damage.  A few dinghies were flipped in the harbor, but that was about it.  It was the most intense squall I had ever experienced and in my due diligence to help secure the boat I had no time to photograph the squall as it blew through the harbor.  In a matter of minutes it came barreling through and then was gone.  What a way to end the cruise.
See all the shots from Cruise here in the Cruise up Cape Cod Gallery.  Fine Art Prints available and several shots are featured in the 2016 Calendar, available now!