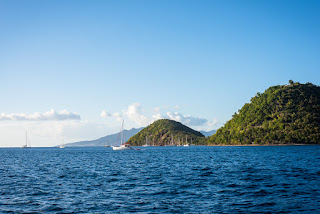 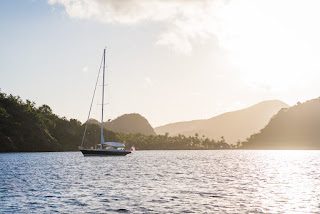 Day 1 – Travel to Guadeloupe
So it was me, my parents, and 4 of their friends, for a week in Guadeloupe aboard a Bali 4.0 catamaran named Diderot from Dream Yacht Charters this February.  I just completed a similar sailing cruise a couple years ago with Cruising World Magazine aboard a Moorings 4800 catamaran, where we took a week to explore St Lucia and the Grenadines down to Grenada.  This time there was more play than work, and a motley crew of Wickford-ers bumbling around in the Caribbean, rum drinks in hand and snorkel masks at the ready.

This trip was a collective brainchild that came to fruition around the holidays.  The local airport in Rhode Island, TF Green, now boasts international flights thanks to the addition of airlines like Norwegian Air, with direct service to both Europe and the Caribbean.  A short car ride to the airport and one budget flight later, and we went from little Rhody straight to Guadeloupe in no time.  In only 4 hours we escaped the 20–30° and snow at home for 70–80° and sun down island.

After our absolutely grueling day consisting of one afternoon of door to door travel... our island adventure kicked off to a great start.  We met Diderot at the marina after dark in Pointe a Pitre, dropped off gear, broke the key in the boat door, locked ourselves out of the marina, made plans to break back into the marina by climbing the fence if we needed to, and went to dinner nearby for "swords" of grilled meat and live music.  I had to keep remembering we were in the FRENCH Caribbean as bits of spanish tried to grace my lips, but the wonderful food and atmosphere quickly washed away all cares.  We didn't have much of an itinerary, but no one was complaining.  The first round of mojitos and rum drinks were already completed.  (Other boaters were still awake when we got back from dinner, so no climbing over the fence was required in the end.) 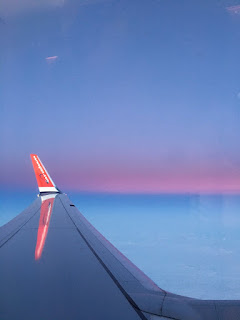 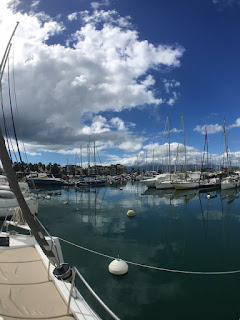 Day 2 – Departure for Les Saintes
It was a slow morning for last minute provisioning and repairs (that key we broke last night during our first 20 minutes aboard).  We left the marina in Point a Pitre at 1pm in light sun showers, 80°, and 15–20 knots of wind. 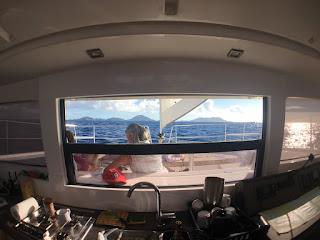 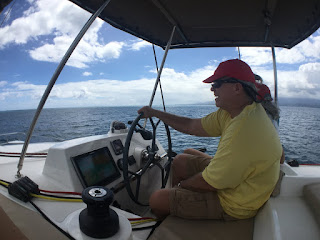 Guadeloupe is actually a collection of nearly a dozen islands.  The main island is often referred to as a big butterfly in shape, but I mostly pictured a pair of lungs with one lobe missing.  Thanks to the trade winds, the weather is extremely predictable and consistent, with easterly winds building every day to about 15–20 knots, sun shine, and occasional rain showers passing for brief 10–20 minute intervals, usually followed by a rainbow and stunning sunset.

We were hoping to make the one long upwind haul to a little island to the west called Petite Terre, where the whole island is mostly protected conservation land with terrific snorkeling.  But as we poked our nose out from around the point, the 3–4 ft sea swell and wind dead on the nose made for a very uncomfortable ride, and we quickly abandoned our plan for an alternative route south to Îles des Saintes.

With our change in direction to a beam reach, sails went up and motors were off for an average of 6 knots.  Rum drinks all around!  By 3pm we cranked up the speed to 8 knots via motorsail to make sure we had ample time to find a mooring before sunset at 6pm.  We pulled into Îles des Saints at 5pm, set anchor just outside the harbor in the cut between Terre-de-Haut and Îlet à Cabrit, just in time for a sunset swim. 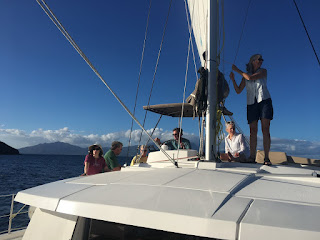 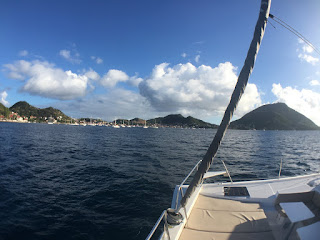 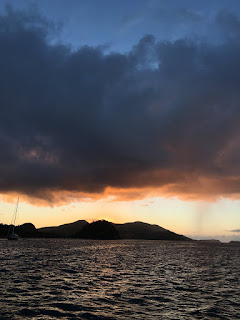 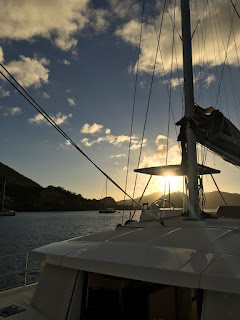 We had quite the adventure going ashore for dinner.  The four of us ladies were chauffeured to a nearby beach in the dinghy, but it being dark already we weren't 100% sure what the landing would be like.  In the dark, we approached what looked like a dock, but ended up being a cement jetty on a stony beach, complete with 1ft breaking waves.  We avoided careening into the jetty, and aimed for the beach.  I leapt out onto dry land, but everyone else was quickly sucked back out to sea some 40–50ft by an incoming wave.  All I could do was watch as my mom and her friends came crashing into the beach abeam of the rollers!  Luckily there was no damage, and it all really made for a good laugh.  The dinghy was shoved off the beach for the second trip, where we decided to walk into town and meet the guys at the harbor dinghy dock.  The adventure wasn't over, as we soon realized we were on a private beach, not a public one, and had to skirt around a private home's perimeter fence to find the road. 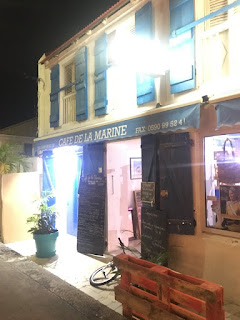 We all met up in town.  It was only 7pm, but everything was rather closed down.  It was supposed to be peak season on a Friday night, but after the hurricanes this past September, Maria in particular, much of Guadeloupe was still recovering physically and economically from the damage.  This island was very lucky compared to islands like Barbuda which was just a couple islands north on the archipelago, or Dominca just south.  I hadn't noticed any overt destruction or damage, and perhaps it was thanks in part to France developing great infrastructure for Guadeloupe.

We did find dinner in Café de la Marine just next to the dinghy dock for a wonderful dinner overlooking the harbor.  It was more like amazing french cuisine than Caribbean fare, with delicious tuna tartare, mushroom risotto, and duck with sweet potato.  We were back at the boat by 9pm, and after some late night cards we called it a night.  So far, Guadeloupe was living up to everyone's expectations.