Day 9:  Cabo Pulmo cont.
It was only noontime and we felt like we had already spent the entire day out on the reef!  It was a satisfied and accomplished feeling, but we were still tired.  We decided to rest up for an attempt at a sunset shoot back at Playa Arbolito.  On the way back to the Casita from the beach, we actually passed our German friends Lars & Maggie on the road!  We hadn't heard from them since we parted ways back in El Pescadero but it was good to see they were in the area too.
We stopped at one of the two grocery stores in Cabo Pulmo, showered, made guacamole for lunch and enjoyed the afternoon sun out on the patio.  It felt like paradise.
We departed for Playa Arbolito at 4pm but swung by Los Frailes first, just around the point.  Sure enough, Lars and Maggie had already set up camp for the night in one of the abandoned palapas.  The fishermen come by the dozens for fishing season, erecting makeshift shacks for shelter, and then abandon them once the season is over.  It was like a little village, but with some fish bones and fishing line scattered about.  We talked for over an hour with the Germans before heading back to the beach for sunset.  With some clouds moving in from the west, it was looking like the shoot would be a great one!
It was a twenty minute walk across the hilly terrain down the point.  At times the trail was only inches wide and fell about fifteen feet down onto rocks, but it was really an easy walk down to the end of the point where we had swum to earlier in the day.  The tide was down so all the rocks were exposed, making for some spectacular scenery!  The clouds kept lightly rolling as dusk approached.  There wasn't an overwhelming amount of color in the sky but utilizing long exposures I made the best out of every bit there was.  These were my favorite two frames of the shoot, and perhaps also my favorites from the entire trip. 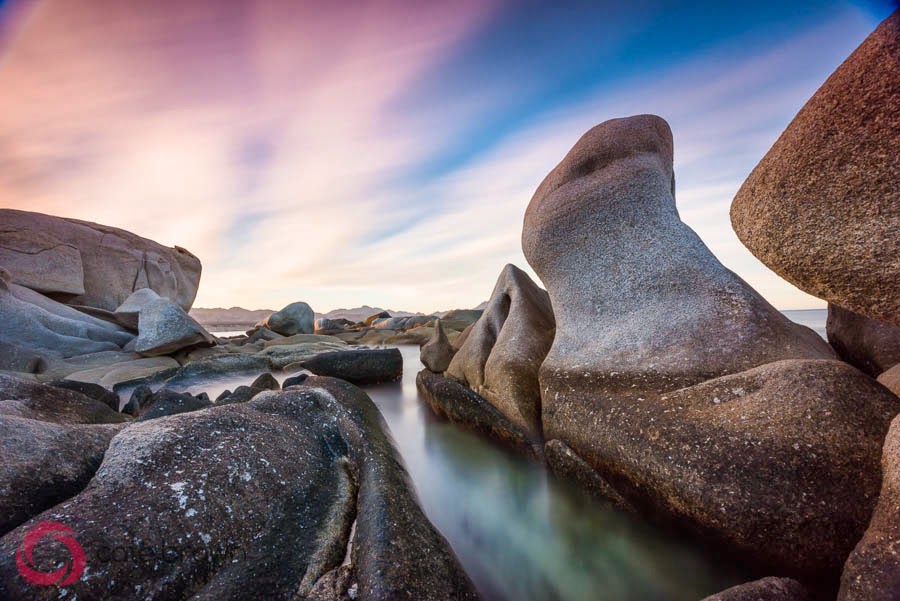 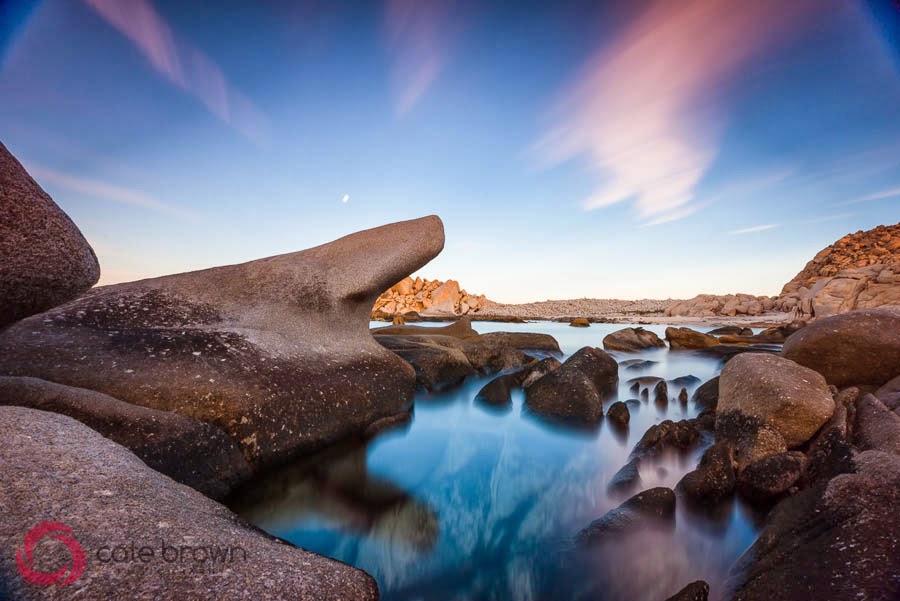 Lyle left for the walk back to the car before me, since the gate down to the beach promptly closed at 7pm.  I took a last frame... then another last frame... and before I knew it, it was 6:40 and I was facing a twenty minute walk back to the car!
I packed up and half ran back to the parking lot, being sure to change pace to a brisk walk at the most dangerous parts of the trail.  There would be no sprained ankles while I was alone at the end of a Mexican point!
I shaved 8 minutes off the walk back, and huffing and puffing, climbed down to... an empty parking lot.  Lyle must have gotten anxious about the time and decided to drive the kilometer back up the road to the gate.  It was a bit of a downer, but I just propped my tripod over my shoulders and started the trek.  The light was fading, the road was lonely, and I could hear creatures rustling in the dry brush.   It was almost pitch black now, no moon to light my way, and I had been walking up the slightly inclined dirt road for almost 15 minutes when Lyle finally appeared out of the darkness with his headlamp and flashlight.
Thankful for the company and for him to take my backpack, we walked the last ten minutes back to the car together.  We were looking forward to dinner and I was ready for a second shower.
More photos at www.catebrownphoto.com