I've done shoots in Narragansett for surfing, at twilight and dusk to capture the Towers, but I had never gone for a sunrise seascape shoot until recently.  These were two separate visits to Narragansett Beach during low tide.  The first was at dusk as the clouds rolled in and the sky turned pale pink.  With extra sand removed from the beach after the hurricane, the old pillons and remnants of Old Narraganset Pier seemed more exposed.
For a little background and history:  Narragansett Pier and Casino was a thriving area in the early 1900's.  The casino tragically burned to the ground on Sept. 12, 1900, leaving nothing but The Towers which are still a Narragansett icon to this day.  These pillons were part of the "Landing of the Providence Boat" on the "Bathing Beach at Sherry's Pavilion".  You can find some great historic postcards at various websites:  CardCow.com, Shorpy.com, DrawRM.com...  My lifelong impression about these old pillons and the boat landing was that it was destroyed in the Hurricane of 1938, but my assumptions were wrong!  According to the town website, "The 1897 steamboat landing pier on the beach lasted only a decade, and was demolished in 1908 following persistent damage by heavy surf."
Anyway, these pillons provided me the perfect opportunity for seascape shooting, offering a foreground subject to hold viewer attention within the frame.  I especially loved the visual effect of the receding water as the waves pulled back into the sea. 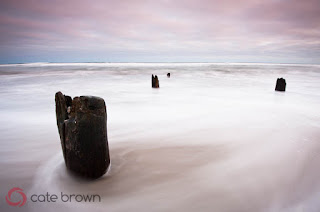 But the one dusk shoot didn't satisfy my creative curiosity with these pillon remnants.  So I returned the next morning for a sunrise shoot.  Same subject, same long exposure technique, but different times of day.  I found my creativity was spurred on by the rising sun.  The depth of blues and golds were enchanting and I captured many more images with several different compositions. 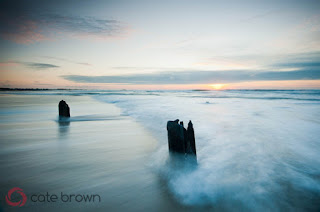 This was perhaps my favorite of the day (below), taken while I was packing up my equipment and turned one last time toward the sun.  I reset my tripod for one last composition before heading home for warm tea and a full breakfast.  With a long shot composition versus a closeup, I was able to capture the brilliancy of the sun and the graphic pattern of several sets of pillons, not to mention the broken clouds reflecting the morning light.
The entire experience of returning to the same location two days in a row served as a creative exploration.  I have to fight to wake up early for these morning shoots, but I find I'm much happier with the results.  Perhaps it's the rising sun, or the fact beaches and shores are more devoid of people and traffic at 5am.  Even though I started day two with the same composition and visual expectations for the old pier, the morning shoot evolved much more to my liking than the dusk shoot the day before.  I never really cross off locations from my shoot list.  Perhaps I return within a day, or a week, a month, or even a year, but I always try to return to those locations and subjects that truly capture my attention and engage my creative spirit.  Narragansett Beach will forever be one of my inspirations! 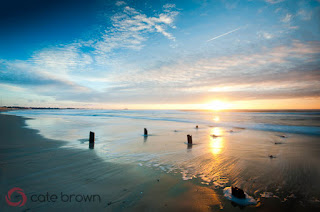 You can see all of the shots and order prints on my website under Coastal Life and Limited Editions.