One of my biggest challenges has been critical selection.  Too often I will take dozens of shots during a shoot, completely enthralled by the light and compositions, when I really only set out to capture one or two frames.  And then, back in the editing room, I struggle to pick out just a couple of final shots.  Sometimes I'll come away with 5 shots that should really have been narrowed down to one, and I share and post all 5, compounding an already enormous catalog of imagery available for prints.  Being extra critical of one's work and extremely selective about final pieces seems to be an unattainable talent, but I'm working at it.
Over 6 months since my first visit to a new seascape location, Qeba (Quonny's), I had only 30 minutes to take shots, 15 minutes before and after sunset.  I was stopping in during a drive to Connecticut and I couldn't linger for fear of missing my appointment.  As any scape photographer may know, sometimes looking away from the sun can be just as, if not more, rewarding than shooting into the sun as it sets. With a low and slightly incoming tide and wispy clouds that became under lit at just the right moment, I captured this calm seascape with receding water pulling itself back into the crystal clear ocean. These ocean vistas never cease to amaze me with their beauty.  I had two favorite shots I was going to post from this shoot but in practice of my critical selection skills, I posted my one true favorite instead. 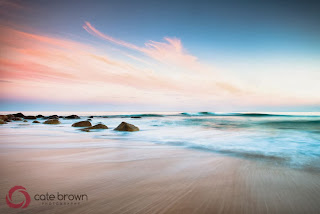 The next morning I woke up early to drive down to Scarborough Beach for a winter sunrise seascape.  It was cold, luckily not windy, and I arrived half an hour before the sun broke the horizon. While I usually favor sunset/dusk to sunrise due to soft pale colors instead of harsh contrasting tones, I wasn't overly pleased with some of my seascapes from that particular morning. But as I was walking back to the car at 7:30am, I took a look back and saw the backlit reeds glowing in the morning sun. Every shot is worth taking because sometimes you just might walk away with a gorgeous golden beauty breathing all of the sense of the scene into one frame.  Again, in practice of my critical selection, I scrapped most of the seascape compositions I had struggled through that morning.  This was my most successful shot of the day and even though it wasn't what I set out to capture, it left me glowing with pride! 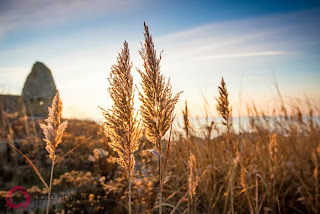