Night is always so mysterious, especially the darkest nights when the moon is absent.  I've always been intrigued by night time shooting.  I idolize and admire the galactic photographers capturing incredible images of the night sky and Milky Way from the remote regions of desert where light pollution cannot reach.  Those pictures always make you stop and stare, thinking about life elsewhere in the universe or your small role to play in everything out there.  As part of my recent seascape project I haven't discounted nighttime shooting.  And no sooner had I set this assignment upon myself that a new moon arrived and I had the perfect opportunity.  So I drove down to Black Point Park in Scarborough and began my shoot with a precarious climb down rocks and trails in the dark.
Camera on my back, sturdy tripod in hand, small flashlight in the other, and no moonlight to see by.  I could hear the childhood me wide eyed and breathless at the sound of every leaf and breaking branch, visions of the coyotes I know for a fact to exist in the area jumping out of the darkness and attacking.  Then there was a break in the trees and a relief from the uncomfortably enclosed trail.  I had reached the water and the night sky was visible, stars, light pollution and all.  Now a different fear came over me as I could hear the rocks and surf smashing against the rocks.  A little further out of the trees and I realized the rocks were actually a decent sized cliff with a sheer face down to the empty abyss of crashing waves below.  I don't know how high the surf really was, how high the cliff actually was, or if there were any rogue waves at all, but the only sound filling the night was of crashing waves.  And without a visual confirmation, I could only image huge rolling walls of water breaking viciously against sharp rocks hundreds of feet below me.  The human mind and imagination is a terribly powerful thing.
But as I climbed down I could still only hear surf but then I could see just your average mid incoming tide breaking over the rocks.  And the rocks splayed out into the sea, making wonderful flat viewing platforms for the night sky.  I found a dry patch of rock that would not see an ounce of water for my entire visit, put my pack down in a dry and secure nook of rock, and went to work.  It's hard to focus the camera in the dark with a dim flashlight as your only aid, but I did my best.
I was actually very drawn to the light illuminated from Newport in the distance and it remained my focus for the entire evening.  I was only there about an hour, but I had my fill and wanted to get a look at the shots on the computer.  A thorough assessment would better prepare me for trip number 2 in the near future.  I also did some homework and reading on a couple of blogs and articles interviewing and discussing night and long exposure photography.
Here's visit #1.  I'll be sure to tell you when I have visit #2 under my belt as well.  This image along with others can be seen in the Recent Work section of my website! 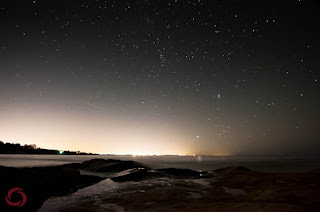