The Power of Long Exposure

There's a couple of reasons why I love long exposure photography.  It forces you to take your time.  It softens elements like water in a way that makes them gentle and approachable.  It also enhances the color of a frame.  Even if the color of the scene is hard to see with our human eyes, somehow colors are boosted and saturated as the camera shutter stays open longer.

While on a recent shoot to Black Point in Scarborough, Narragansett, I brought along several of my long exposure tools:  a tripod, Gradual Density Filter, Neutral Density Filter and B+W #110 (extreme) Neutral Density Filter.  As I composed my shot by a tidepool and photographed the moonrise, I played with my filters and settings to experiment with different exposure lengths.
The image on the left was taken with the B+W #110 ND Filter, the darkest densest filter you can get.  It looks almost solid black in your hand, but it still allows some light through so you can photograph long exposures at midday without overexposing your shot.  Typically when shooting the moon, you want to stay within 8-10 seconds.  Any longer than that and the moon begins to blur leaving a trail visible in the frame instead of a crisp round orb.  Using my #110 at dusk meant I had little light to deal with and the filter was restricting the light even more.  A 20 second exposure still wasn't cutting it and I didn't want to drop my aperture much below f/11 for fear of making my depth of field too shallow and putting too much of the scene out of focus.  So I was left with the ISO, and I had to push it up to 1000 before my exposure was balanced!
On the right I was using my standard ND filter which lets much more light through than the #110.  It was perfect for this time of day when the light isn't completely gone but I still wanted a longer exposure.  I was able to keep my shutter speed at 8 seconds for the moon, and my ISO at 100 to reduce noise.  The depth of field was at f/22 so absolutely everything from the rock in the foreground to the horizon was in focus thanks to my deep depth of field.
Now, I broke a couple of my rules with the #110.  My exposure was longer than I wanted since I was shooting the moon.  I was at f/11 which restricted my depth of field a little too much, leaving the rock in the foreground out of focus.  And I was at ISO 1000 which would have much more color noise than if I shot at my usual ISO 100 or 200.  But what do you think?  Was it worth it? 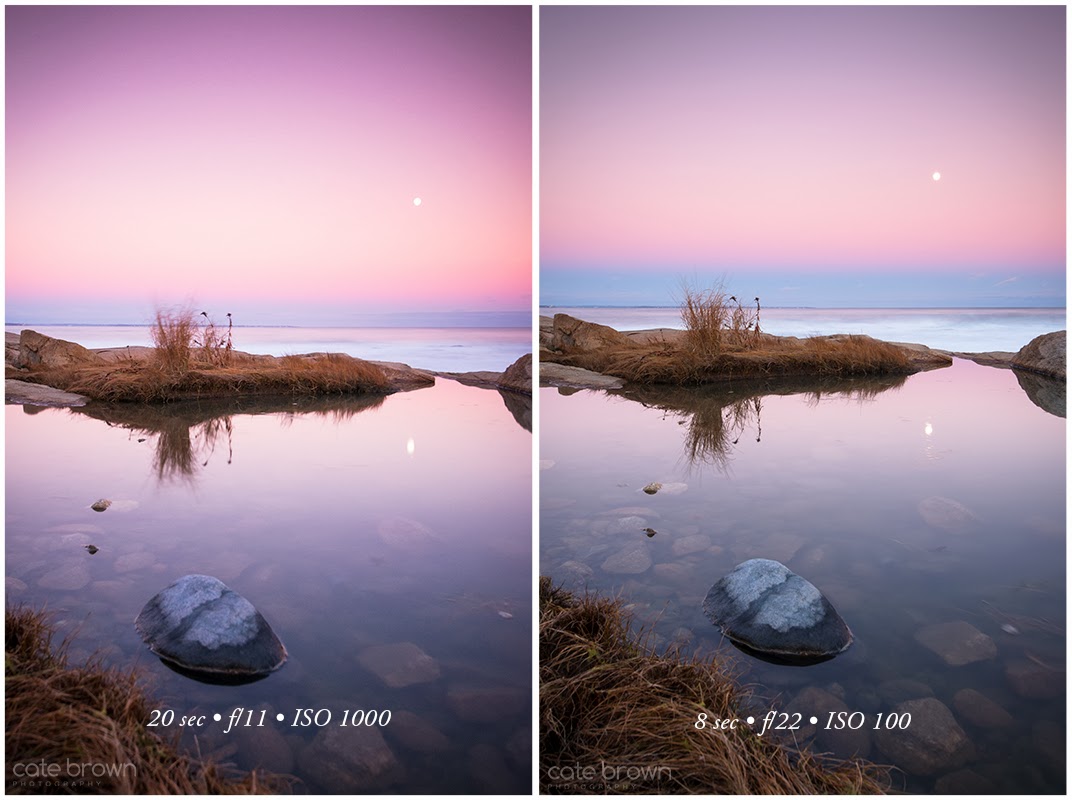 When I edited both of the RAW files to my quality standards I could never get them to match.  Actually, the frame on the left was edited much less than the frame on the right.  And even though the scene I saw looked more like the frame on the right, the frame on the left captures how it truly felt.  The longer exposure captured more color and subtlety, warmth and gentleness.  That's how it felt to be by a cool tidepool watching the moonrise on a pale pink sky.  It felt gentle yet powerful.  Cool yet familiar and warm.
So even though I broke some of my own long exposure rules, it was all worth it in the end.  And I fell in love with long exposure photography all over again.