Well I told you there would be more photos on the way and here they are!  I shot these from land while watching the first day of racing in the America's Cup World Series on Thursday.  I didn't get quite as close as the practice day I attended, but it was still a great time and a terrific event to watch and have in town. I can't wait until the final event in San Francisco, I guess we'll all just have to wait patiently until 2013!

This day was much calmer with a slight seabreeze, compared to the very blustery practice days. The breeze managed to fill in a bit more in the mid afternoon, but by then the racing had completed.  First, there was a fleet race to determine who would race against who in the match races, and the order those match races would occur.  For both Oracle Team USA boats, it came down to the last race with USA Coutts against Luna Rossa Swordfish, and USA Spithill against Team Korea.  Korea was not making it easy for Spithill, and they were absolutely neck and neck for the first half of the race, but both USA Teams beat out their competitors in the one-on-one match races and were able to move onto the semi finals.  Also in the semis were Artemis Racing who beat out Energy France 2-0, and Luna Rossa Pirhana who beat Emirates New Zealand 2-0 as well.  Both of these matches were not without action, and Emirates New Zealand certainly put on a show for spectators.

On their second rounding of the windward mark in their first race against the Italians, only the second race of the day, New Zealand capsized.  That's right, the kiwis flipped right over!  No one was hurt luckily, because big boat capsizes can often mean injury.  It's not the capsize that gets you, but often it's the fall from the windward hull as you hit equipment and spars on the way down.  As any catamaran sailor knows, these aren't the easy-peezy capsizes you might experience in other boats that you can just flip right back over and keep sailing... these capsizes cripple you until a motorboat can toss a line over and pull you upright by the windward hull. Poor New Zealand was capsized for over two hours, and it was not for lack of sailing experience. The traditional method to right the boat only resulted in parking it on it's stern, with both bows pointing straight up into the sky.  Also causing trouble was the extra 10 ft. at the top of the wing known as the "extension". None of these boats had capsized with the extender on before, and pretty much as soon as the wing went over, this extension start filling with water due to the seam where it attaches to the main wing.  The boats upended position compounded with the extension filling with water, spectators getting too close and the boat driftin towards Rose Island, the bridge, moored boats... it's no wonder they had trouble righting it. But in the end, a crew member managed to unbolt the extension and release the water filling the wing, and the boat was put upright again.

Team New Zealand was out of the running for the cup but they still had a chance to compete in the fleet races and speed trials happening over the weekend.  They made repairs and returned Friday to give everyone a run for their money!

For all of my photos from the ACWS, visit my website and America's Cup Newport gallery!  Also, for more America's Cup info, check out the official website, americascup.com.
Again, I brought the Nikon D700 with me, and my trusty 70-200mm lens. 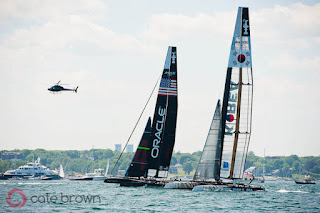 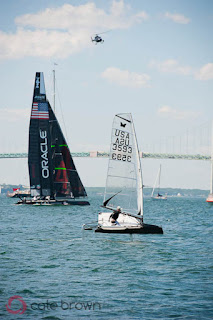 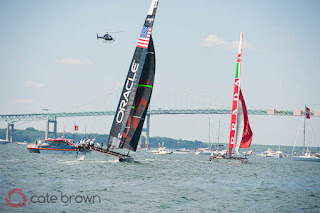 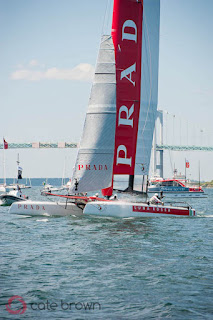 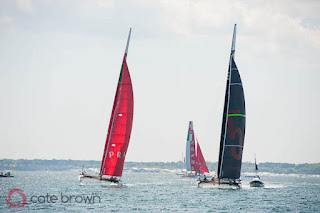 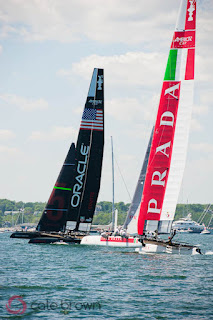 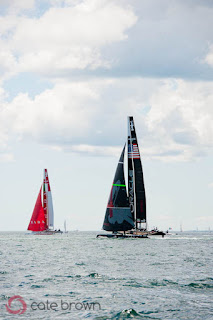