More drones!  It's hard enough to find time to go shoot for myself, but with my new aerial drone system I need extra time dedicated to flying practice, too.  I had a rather busy day at the end of April and I just needed to get outside and go shooting.  It was 5:30pm and with sunset so late these days I had plenty of time to get a kit together and make it to the beach.  I turned from my DSLR camera bag and grabbed my 3DR instead, gave my drone batteries a little extra juice, and hopped in the car deciding on the road to go shooting at Narrow River.
It was a bit windy but I know my drone can fly up to 55mph which means it should be able to handle a 12 knot breeze no problem.  I would just have to keep an eye on my battery life as it would surely be depleted more quickly if I tried flying into a headwind.  I parked at the north most parking lot at Narragansett Beach and started walking up towards the mouth of the Narrow River.  I lucked out with my timing, the tide was extra low, the clouds had moved out allowing golden dusk light to spill across the sand, and there was enough wave action to make for a little more visual appeal from the air.
Sunset was at 7:30pm and with 20 minutes to go, I decided to fly the drone while walking instead of waiting until I got to the river.  I launched and continued my stroll, shooting as I went.  (It ended up being a good decision because by the time I was walking back clouds had moved back in.)
Once I reached the river mouth the wind seemed eerily calmer and the water was quiet.  A few people were fishing and the low tide exposed extra sand dunes forcing the water to wind and carve its way back to the ocean.  I changed batteries and re-launched, knowing that my drone would still be experiencing breeze at altitude even if I wasn't at ground level.  I flew up the river, a ways turned around, and found a few beautiful bends to photograph.  Once I felt like I had the shot, I made my way back to the launch point practicing my manual maneuvers instead of using auto-pilot to return the drone to its take off point.
I was only at the beach for 45 minutes, and only flying for about 30 of those minutes, but it felt like mission accomplished.  I walked away with some gorgeous overhead verticals of the beach and couldn't be happier!  I'm going to have to start a whole new Aerial gallery on my website...
Recent Work 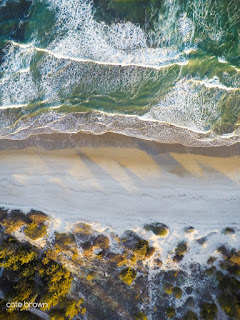 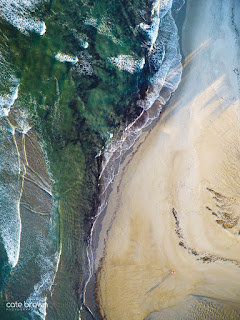 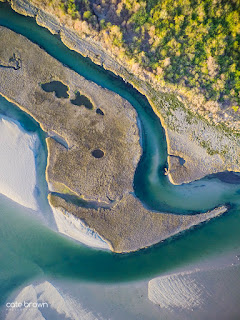