America's Cup in Newport! And a new camera

Oh the excitement!  The America's Cup World Series has arrived in Newport and just about everyone is talking about it!  The boats arrived via shipping containers in Quonset, and Tuesday I was able to get out on the water to check out the AC45's during practice.  The great thing about visiting during the first half of the week was ACWS Village admission was free, parking was only $10 and there was no restricted race area out in the channel so I was able to get right up close!  Of course, I was rather fearful I was going to be run through by a carbon fiber catamaran, but these are rather talented sailors with rather maneuverable boats.  There was a slight rain shower (and I mean like a small funnel of rain just passing through), but other than that it was sunny skies and a decent seabreeze, topping out at about 13 knots by 3pm-ish.

For anyone who might be unaware, the America's Cup is the longest running active trophied event in international sport, and Newport has a long history with the cup having hosted the event and produced winning vessels numerous times throughout the cup's long history. It always comes down to a match race between the defending champion and the challenger, and the current defending champion is the great USA who beat out the Swiss Alinghi in 2010 to reclaim the cup.  The events held in Newport decide who gets to challenge the defender in September 2013, in San Francisco.

These boats were an absolute blast to watch and I was able to watch from land at the ACWS Village on Thursday, the first day of competition (you'll have to wait patiently for those photos in the blog!).  Tickets were required to watch from Fort Adams and the ACWS during race days but I found it well worth the $10 price tag!
To see all of my photos from the ACWS, head on over to my website and check out the America's Cup Newport gallery. 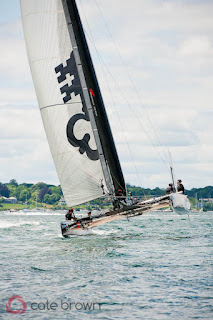 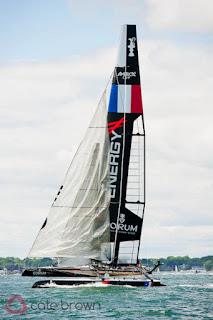 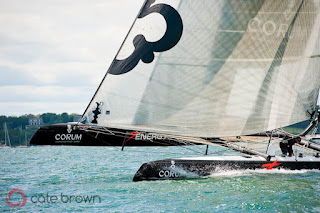 Also noteworthy is my new camera!  I stepped up from my tired Nikon D80 and purchased a Nikon D700 recently.  The D80 will move to secondary camera/reserve status and this was the first time I took the D700 out for a spin!  I have to say I was very happy with the results!  When it came to button layout and internal navigation, there was obviously more stuff going on inside the camera seeing as how the D700 is from Nikon's next-most-professional-line of cameras compared to the D80 and D90s.  But I adapted quite quickly to these small changes and was able to shoot effortlessly.  The D700 had most noteably moved several key buttons to an easy to find and adjust location on the top of the camera:  ISO, Quality, and White Balance.  I loved having these dedicated buttons so close at hand, and from the reviews I read before the purchase, there are plenty of other photographers who like them too.
The biggest difference between this camera and my old one was the change in chip size, from a cropped sensor to a full frame sensor that is a true 35mm in size.  This size difference plus a few more megapixels means a bigger image in the end, and it also fully utilizes some of my newer lenses (which I purchased with a full frame chip in mind).
The D700 also boasts great low light capturing capabilities with high ISO settings with low noise.  I'll let you know how that turns out in the future!
But so you know, how I got these shots:  Nikon D700, Nikkor 70-200mm VRII 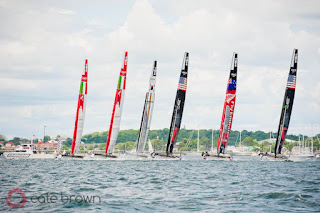 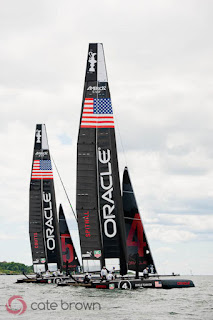 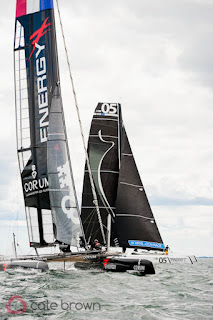 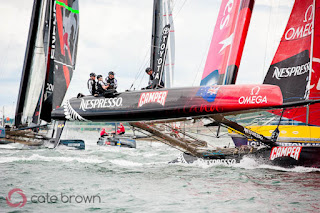 You might notice that there is another multihull in the mix!  This is a MOD70, part of a small fleet also visiting Newport.  These boats were here for a week before making the journey to New York for the start of the KYRS Ocean Race, sailing from NY to Brest, France.  The MOD70s are bigger than the AC45s (70 ft. versus 45 ft.), and are trimarans.  This one was sailing around during practice and Energy Team France went over to say "hello".  I'm going to bet these two french boats knew each other! 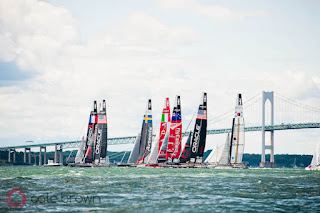 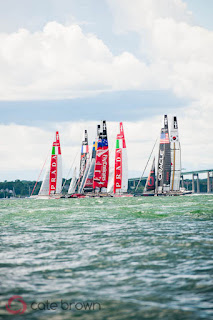 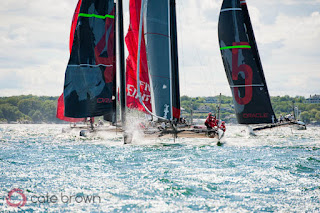 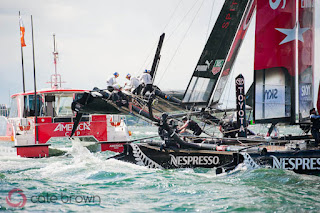