Club 420s are one of the most popular double handed designs for junior sailors throughout North America.  This year the National Championship came to Newport, Rhode Island, and I was on the water for the first two days of competition.  With 196 boats, three separate fleets, and a starting line with two mid-line committee boats, it was a busy day of racing out on Narragansett Bay!

Day One started with 2 hours of postponement, pushing the harbor start back until noon.  With sunny, hot, and humid conditions, most everyone was thankful the sea breeze started to fill from the south, however lightly.

Once the course was set and the races were underway, the sea breeze was a steady 7-10 knots.  Sailors from across the country competed on a trapezoid racecourse, and many faced ocean currents for the first time.  The strong outgoing tide made for dozens of boats overstanding the windward mark by several boat lengths later in the afternoon.

The most interesting race of the day occurred for Blue Fleet's Race 2, where a split in the fleet made for some trouble for Race Committee.  The plan was for the starts to proceed as follows:  Green Fleet - Trapezoid Outer Course, Blue Fleet - Inner, Yellow Fleet - Inner.  Regardless of the plan, when it came to Race 1 for Blue Fleet the flags indicated an Outer Trapezoid course, and that's what the fleet sailed.  Things didn't get interesting until Race 2, when the Race Committee corrected their flag signals to reflect the originally intentioned Inner Course.

As the Blue Fleet Race 2 got underway it became apparent after the first windward mark that something was wrong as only a dozen or so of the 65 boat fleet was sailing downwind in the Inner Course.  It was soon realized that half the fleet was sailing the wrong Outer course, following the same track as their first race, while the dozen boats in the second half of the fleet were sailing the correct Inner course according the signal flags.  I'm sure there were multiple boats who filed for Redress after that race, and Race Committee had some sorting out to do for the scoring!

Racing went well into the afternoon, past 4pm, as the sun began to sink and haze started to form on the horizon.  Three races were completed for each fleet and hopefully most everyone had a good first day of Nationals! 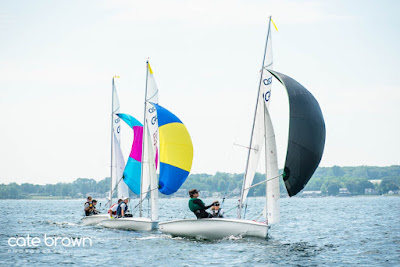 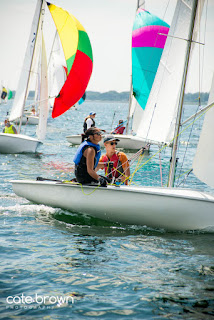 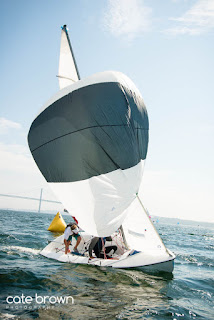 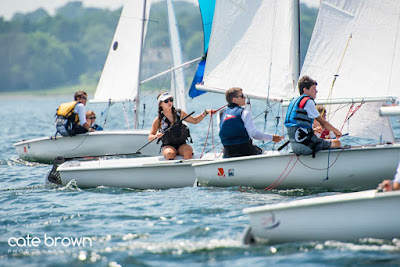 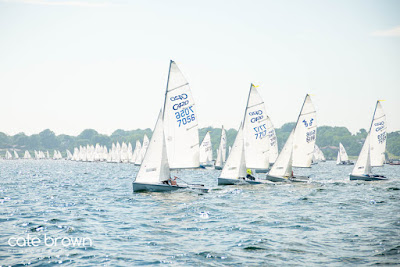 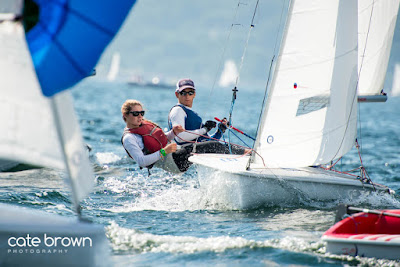