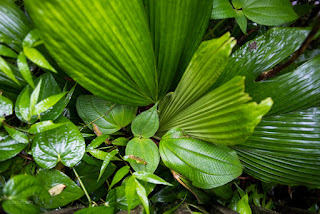 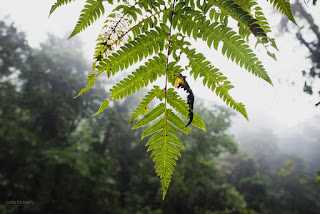 Day 5 – Basse Terre & Chutes du Carbet Waterfall
"Basse Terre" is a comical misnomer for Gaudeloupe's main island.  It translates to "low land" but it refers to the tallest half of Guadeloupe where you can find rainforest, mountains, and an active volcano.  We had another land-based adventure day, taking a taxi van into the rainforest for a short walk to the Chutes du Carbet waterfalls.  We didn't have enough time for the proper rainforest hike to the Premiere Chute, or the valley hike to the third falls, so we opted for the well developed rainforest boardwalk to Le Duxieme Chute.

Our taxi van arrived at the marina around 10am, with translator / guide Rita and driver Jessica at the wheel.  The drive to the national park was half the fun, as we drove through little communities, up a winding mountain (but paved) road, where the view turned almost immediately from grassy lowlands to towering trees with mist clinging to the branches and vines.  It was only a half hour drive, and we were glad to have the local driver given the small street signs, plus rain and fog that were coming through all morning.  The temperature in the rainforest was cooler, especially without the sun, but still comfortable as we started our walk from the visitor center up the path.  The walkway was very well maintained with stone steps and a cedar boardwalk that eventually changed to cobblestone.  Everything was damp, making the walk a little slippery at times. The path started with a decent down to a bridge over the river, before climbing a bit more to reach the falls.  There was some foliage in the way of the view, but it was still spectacular! 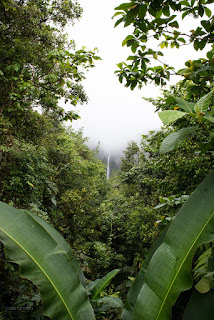 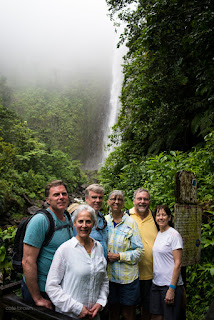 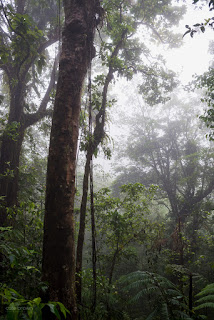 Rita suggested stopping by the nearby Kassaverie for a snack, where we could see the locally grown manioc (cassava) being processed by hand.  The little shop was a gem of a find, where we watched three men peeling the cassava root before it was soaked and pressed into flour, before a couple of women pounded it into little flat cakes that went into large roasting ovens.  The pancakes were filled with a mixture of shredded coconut, vanilla, nutmeg, and probably sugar.  It was perfection, and we quickly devoured two orders of pancakes.  La Kassaverie is located at a roundabout on the national road between Trois Rivieres and Pointe-a-Pirte, and you honestly probably would never stop in if you weren't looking for it!  For being just three little open air buildings, it was a terrific cultural spot complete with local food.

As we continued our drive back to the marina, Rita also took us to the springs at Dolé.  This spring water runs fresh out of the mountains, and is bottled right on the island for Cape Dolé.  Rita showed us a wonderful roadside public bath where we stopped for a dip.  The water was refreshing and tepid, as we basked under tall tropical foliage looking out to sea.  It would've been a paradise if it weren't for the cars buzzing by. 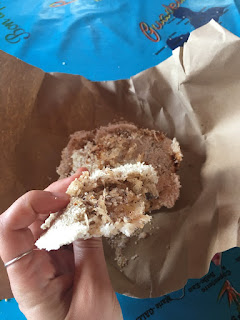 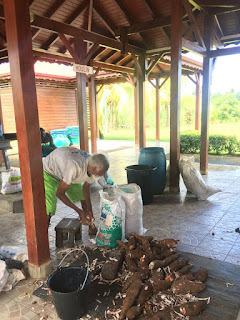 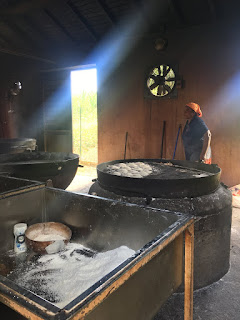 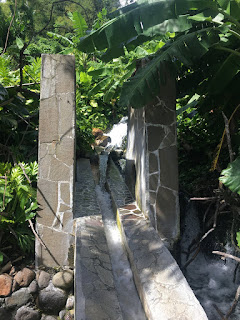 Back at the boat, it was 80° and sunny once again.  We left the dock at 3:30pm to transit up the coast to Bouillante and the underwater parc named for Jacques Cousteau at Pigeon Island.  The water was perfectly flat, with a light 7-10kt breeze rolling off the mountains.  After fighting the fluky winds, which allowed us to hit 8kts downwind before dropping our boatspeed to 2kts, we furled the sails and turned on the motor to make sure we arrived before dark. 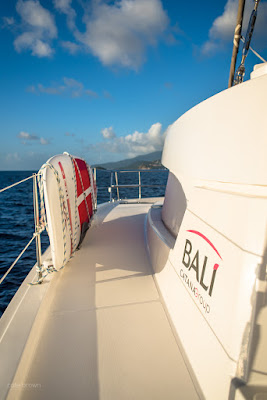 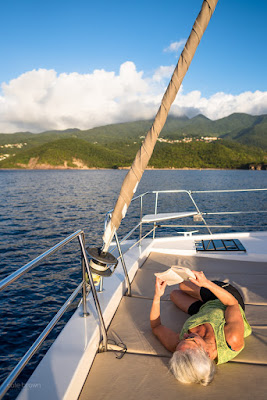 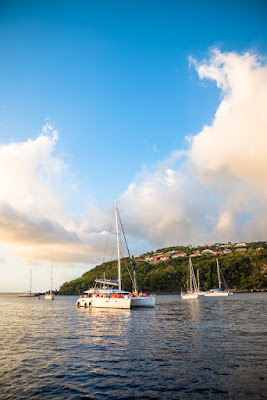 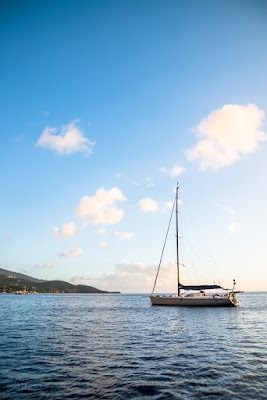 We pulled into the anchorage at Bouillante on the mainland as the sun was going down.  Anchoring outside Bouillante isn't allowed due to the vast underwater preserve around Pigeon Island, which was only a half mile offshore.  The transit took a total of 3 hours, and after some wine and cheese we dinghied into the beach at 7pm for dinner.  Intermittent rains drove us into the beachside bar for almost an hour before we were able to walk up the road to La Rocher de Malendue.  It was one of the only restaurants open for dinner, but we weren't complaining.  The outdoor seating was terrific, and the food was supreme!  We were the typical table of loud Americans, but we were enjoying our drinks and french cuisine far too much not to make a ruckus. 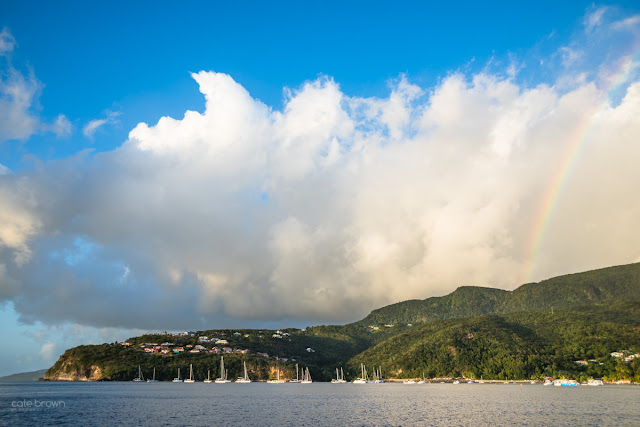 Day 6 – Pigeon Island
All night puffs of wind were rolling down off the mountains, and although the water was much calmer in this anchorage compared to Bourg des Saintes, we were still swinging on our anchor all night long.

Around 11am we motored around the entirety of tiny little Pigeon Island.  Jacques Cousteau had called this some of the best snorkeling in the world, and it showed as guides ferried literal boat loads of tourists in for snorkel and dive trips.  There was also a little section of park along the mainland just to the north of the anchorage, so we motored back over to Bouillante where we had a section of reef all to ourselves.  Later in the day we dinghied back over to Pigeon Island to explore a little bit more.  It was great shallow water for snorkeling, but it was obvious the hurricanes had blown through here.  Parts of the area looked like reef graveyards with shattered coral strewn about the seabed.  There were still plenty of colorful fish, and other sections still had coral intact, but I still found myself comparing it to our first snorkel spot at Baie de Pompierre.

It was rest and relaxation back at the boat the rest of the afternoon.  I managed to get a SUP session in, and we had dinner on the boat. 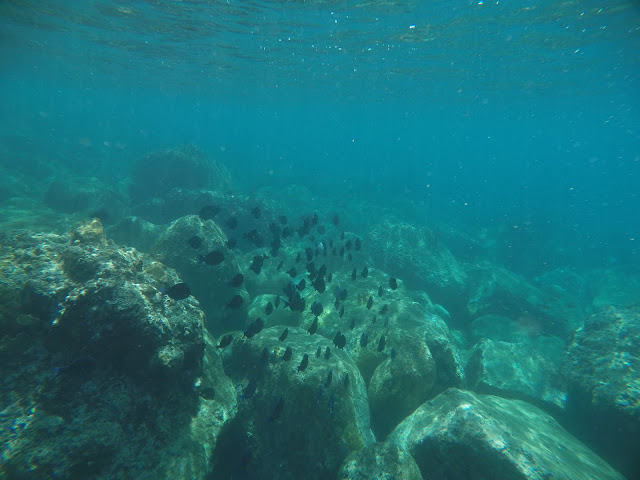 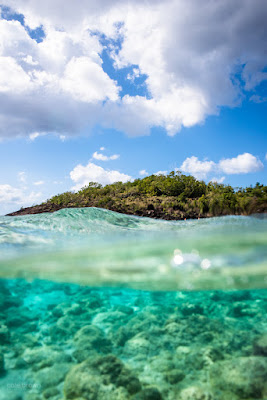 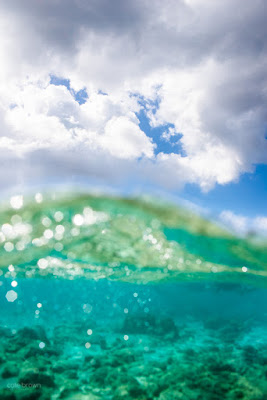