It was an early start for once, leaving the anchor in Bouillante by 7:30am.  It was a calm night, with just one squall rolling down the mountains at 4am, then the usual winds whistling through the hills and rigging, swinging us around as the sun came up.

We had a decision to make about where to spend one of our last nights in Guadeloupe.  We could try to make it a little more upwind towards a new island, Marie Galante, or back to Les Des Saintes.  Either option would be a 16 nautical mile transit, and take most of the day.  Being on the leeward side of the island moving south, we started just under motor, watching rain falling on the mountainsides in the distance.  The west side of Guadeloupe is naught for want of water.

After 2 hours of making good headway at 8kts under power in flat water, we were optimistic about reaching Marie Galante.  But as we rounded the point at Vieux Forte, passing the same lighthouse we had seen just a couple days ago, we were greeted by 4ft sea swell with wind chop and an opposing tide.  Our speed dropped precipitously to 4–5kts, and after an hour of trying to tack through the swell and not making much progress, we called it quits and ducked into Les Saintes.  It still took another 40 minutes to get into harbor, but by 11:15 we were thinking about where to anchor. 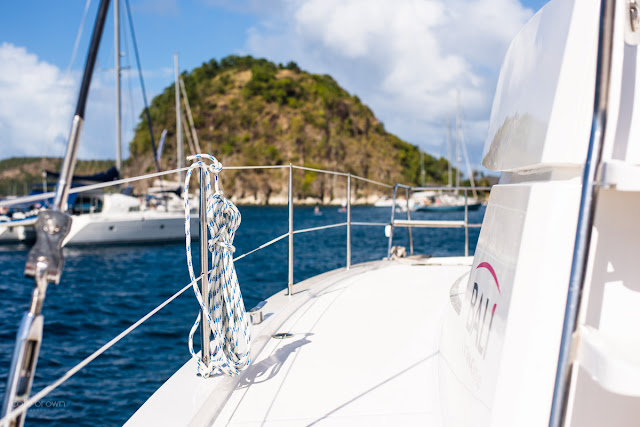 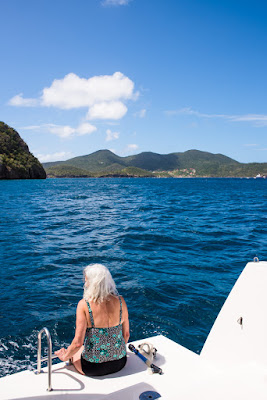 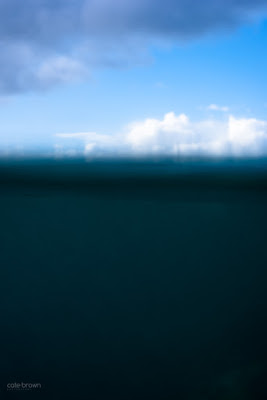 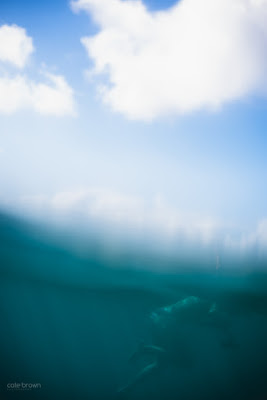 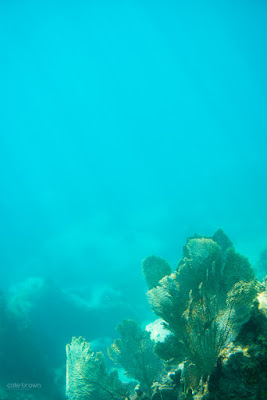 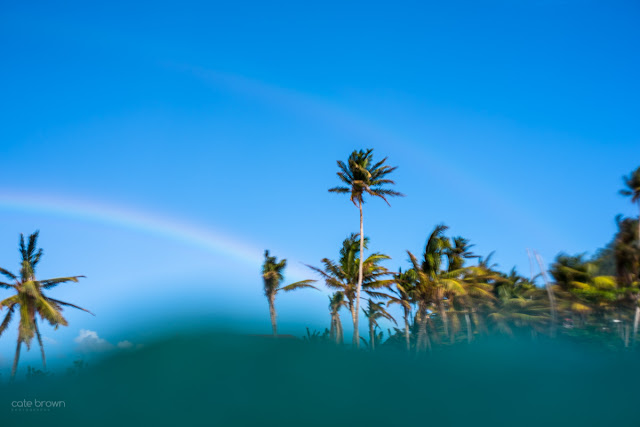 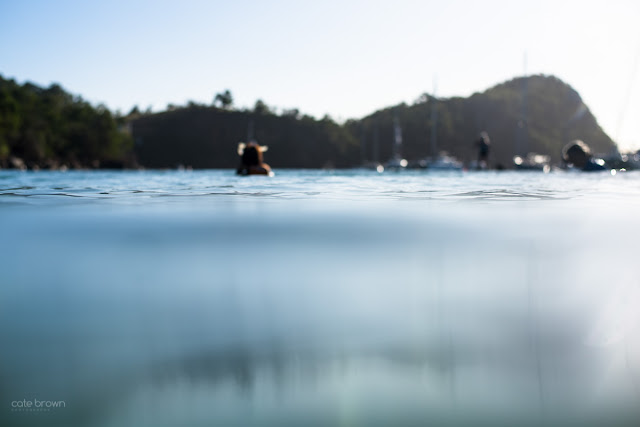 We chose a new little spot around the corner, Pointe du Sucre, and found one of the last open moorings.  What luck.  It was tuna fish salad for lunch on the boat, piña coladas, naps, and snorkeling at the nearby beach in the afternoon.  It was a perfect afternoon after a long morning!

This new anchorage has a strong prevailing wind, so we weren't swirling around on our mooring for once.  And the waters were much flatter compared to the main harbor at Bourg des Saintes.

It was another gorgeous sunset, with a pasta dinner, and a long midnight game of hi-lo-jack to wrap up the day. 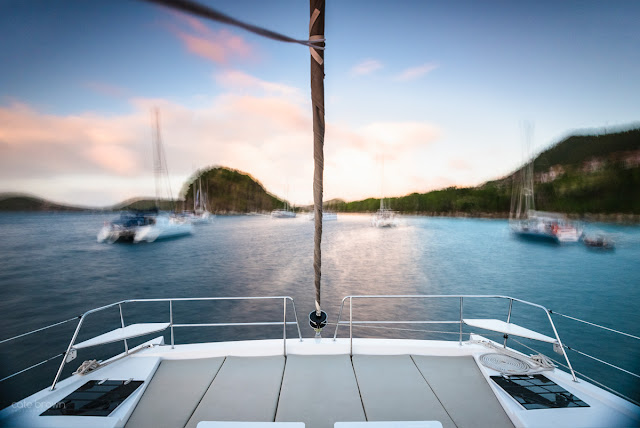 It was our last day down island.  There was a lot of the provisioning to finish, so we made a gigantic egg breakfast before getting underway at 9am.  It was going to be another long transit day to get back to the marina in Pointe a Pitre.  We left harbor heading NE into 20–25 kts and 4ft seas, with steep chop from current and wind.  Typical Caribbean conditions.  After 2 hours of slogging through the first 8 of 18nm, going from 7kts under a reefed main and full jib down to 4kts at times, we had to start taking shifts at the helm.  I hopped on for an hour before being relieved by one of our many Bobs.  By 1:30pm, 4 hours into our sail of varying tacking angles and a dropping wind, we furled the jib and power-sailed the last half, stopping in to little Gosier Island just outside Pointe a Pitre.  We arrived just after 3pm, making it almost 6 hours of transit.

Some grassy patches made anchoring at Gosier tricky, but I immediately fell in love with this little spot!  It was perhaps the best anchorage of the whole trip, with an island like a postcard view.  The water was truly flat and calm, with low breezes to keep you cool and steady on the anchor.  We only had about 2 hours of time to stay for a swim and snack, before getting into the marina before dark (and rain). 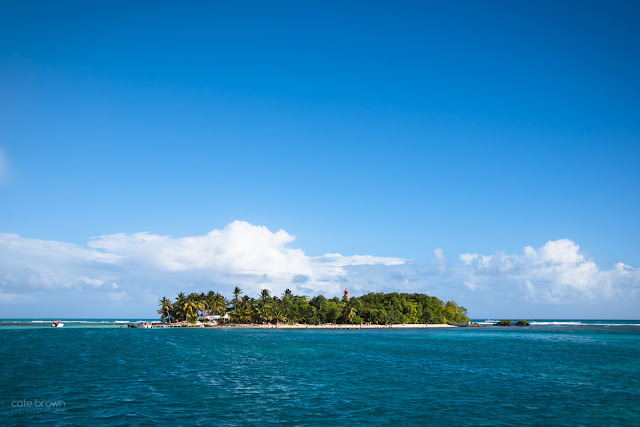 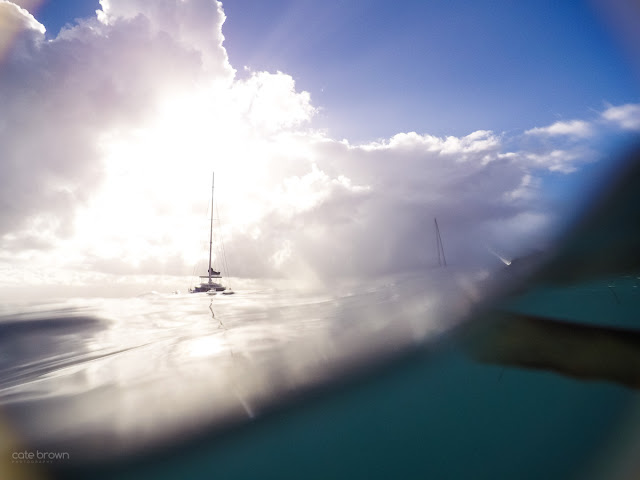 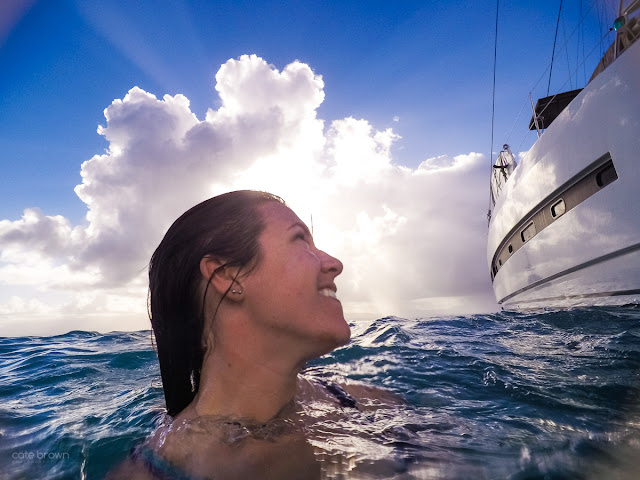 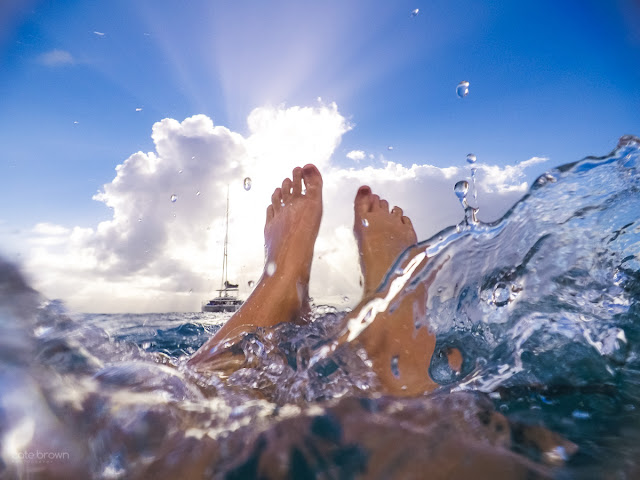 We went back to the same little square next to the marina where we had kicked off our Caribbean adventure, but opted for gourmet meals at the new French restaurant instead, Gargantua Grill.  All that was left for our journey was the [direct] flight back home to Rhode Island.  A week in Guadeloupe well spent!

Worst Port of Call:  Basse Terre on a Sunday