So this part of the Cruise has an interesting story attached... and I'm not sure if I should call this the Second Port of Call?  It wasn't on the itinerary, more of an emergency stop...
Well anyway, after waking up at the crack of dawn from Dutch Harbor, we set off out of Narragansett Bay and turned West towards our next scheduled stop:  Stonington, CT.  The fog was some of the thickest I had seen in a while, definitely the epitome of "New England Pea Soup".  It was barely noon and we were barely past Point Judith.  There was no breeze, and no hint of the fog letting up at all.  We were traveling in tandem with another WYC cruiser, who was relying on our radar for safe passage through the fog.  Everyone in the cockpit was on alert for sights and sounds from nearby vessels.  It was surprisingly busy with sportsfishers and commercial fishing boats despite the extremely heavy fog. We made the decision to turn into the Harbor of Refuge at Galilee to wait until the fog lifted.
Then there was a few scary moments as the Athena, the Block Island Fast Ferry out of Galilee, hailed their position over the radio.  And we realized we were right in the way...  We hailed back, making sure to notify them of our position and intentions:  to stay WELL out of their way and hug the eastern banks of the channel on our way into harbor.  "Okay sailing vessel Papa, we will signal with two horns and pass to your starboard."  "Roger, Athena."  Then it sounded like a helicopter or small plane hovering just above the fog.  A steady wubwubwubwub from somewhere in the mist.  About 100 yards or less off our stern, just to port, I caught a glimpse of the Athena looming through the fog.  And it was cruising!  One horn, and it passed to our port.  They definitely call it the fast ferry for good reason... and it definitely felt too close for comfort with all that fog... but we made it into harbor just fine.
We waited and waited, and made some calls to some friends for dock and mooring space where we could hang out for a bit.  The hours passed, and soon it was late in the afternoon and the decision had been made to stay the night and hope there would be less fog in the morning.
So Papa was tied up to a state pier just by the bridge to the Great Island, and we hung out for the night. It was a night full of drunken people fishing off the pier and the stench of fishing boats, but the fog made for some great night time shooting!  I took a walk along the pier and took the following images of the commercial vessels, all snug in their slips waiting for morning's first light! 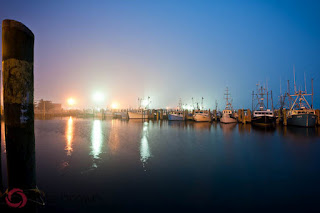 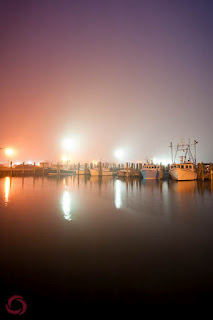 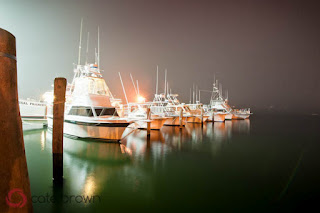 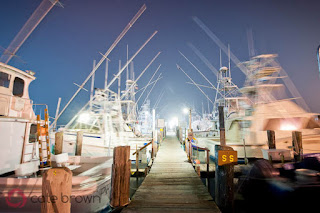 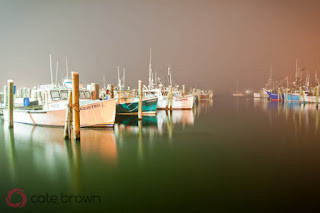 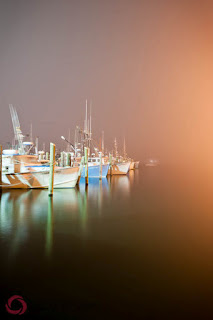