While J Class continued in Newport, I had an adventure awaiting in Maine.  With three free nights to use at a KOA near Acadia National Park, my friend Christina and I made our first visit to the only National Park in the northeast.  We didn't do much planning so we didn't have too many expectations.  A little research on the REI National Parks App, AllTrails.com, and a couple of blogs gave us a few things we wanted to try, but we left room for some exploration as well.  After a 6 hour drive up the east coast on Thursday, broken up by a dinner stop in Portland, we arrived in Maine ready for two and a half days of hiking!
Friday
Jordan Pond Path:  3.2 miles
We kicked off the long weekend with a loop around Jordan Pond, a long stretch of pond nestled between two mountains.  The best part of the trail was perhaps the western half, where it started with a "bog walk" across a delicate lakeside ecosystem, followed by a section of light scrambling over granite boulders.  The trail finished with easy flat walking along the eastern side of the pond to complete the little loop.  We were glad to have completed it once since it's a recommended trail for the park, but we were eager for more...
Beehive Trail:  .8 miles
Next up was one of the iconic "iron rung" trails of Acadia.  While not very long, these treacherous trails scale almost vertically up to the summit of several Acadia Mountains using a combination of granite steps, scrambling, and meticulously placed iron runs and railings.  Two of these trails are located in the heavily trafficked eastern half of the park, and Beehive is perhaps the shortest of the four of them.  While it was only .8 miles to the top, it took us 40 minutes to complete.  At times the path was narrow with a sheer rock face straight to the bottom, but the views were spectacular and made every nervous moment more than worth it!  A+ Acadia.  This trail was great!  We took lunch at the top of the Beehive before climbing down via the half mile Bowl Trail.  An hour stop at Sand Beach for some relaxation in the sun, and we continued on to the iconic Ocean Path.
Ocean Path Trail (partial):  1.2 miles
Ocean Path follows the road in eastern Acadia between Sand Beach and Otter Point.  We drove down the road to Otter Point and decided to walk south to north, ending at Thunder Hole and completing half the trail.  The trail was easy but wonderfully scenic, providing expansive views of the Maine coastline.  We took a long stop at Otter Cliffs to examine the rock climbing, where broken geometric cliffs provide scenic climbing conditions over the ocean.  We were already giddy about making a second trip in the future just for climbing!  But of course we hadn't brought our climbing gear, this was strictly a hiking trip, so we continued on to Thunder Hole.  This tourist attraction is simply a cutout in the ocean cliffs where waves smash against the rock face in just the right way to make booming sounds like claps of thunder. The water level wasn't quite right during our stop so while we heard a few rumbles, it wasn't quite as breathtaking as it potentially could be.
Ship Harbor Trail:  1.4 miles
While we were deciding how to spend our evening, we tried to visit Bass Harbor Head Light for sunset. This is reportedly the most photographed lighthouse in the North East, but with a heavy amount of tourist traffic just before sun down, we decided to scrap that idea and return the next day.  Instead, we went a half mile or so up the road to Ship Harbor Trail, a short little loop that we had zero expectations for but it provided a pleasant surprise.  As the sun went down and the dusk colors of purples and blues started to emerge, the trail took us past a little harbor with mudflats, up a small hill to an ocean overlook, before looping back through the woods.  Compared to the tourists and bustle we had experienced through most of the park all day, it was incredibly quiet and serene.  There was only the sounds of our footsteps and the ocean water lightly running over the shoreline.  This was the peace and quiet we had been seeking all day.  This was the return to nature we loved.  It was the perfect way to end a first day of exploration in Acadia.
See more in the Acadia Park Gallery 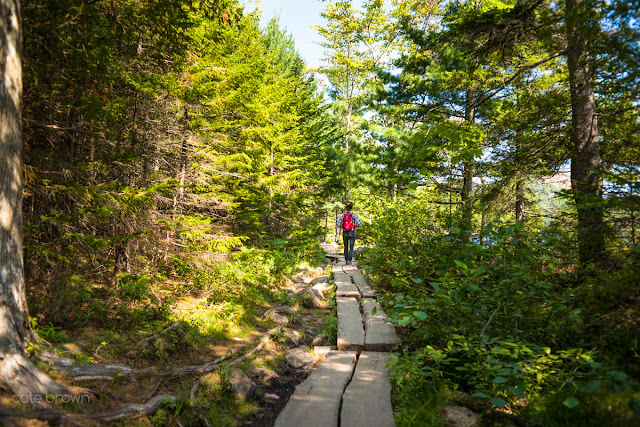 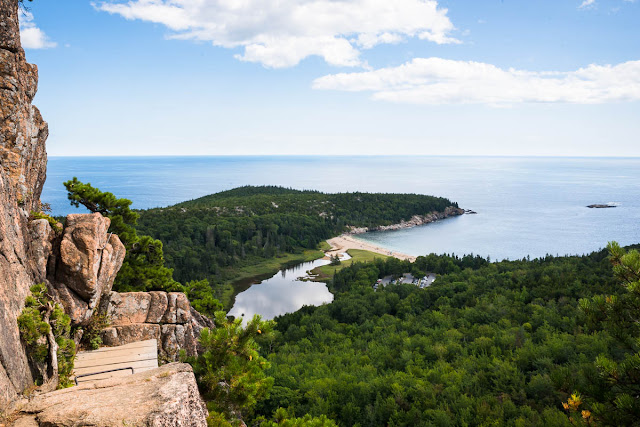 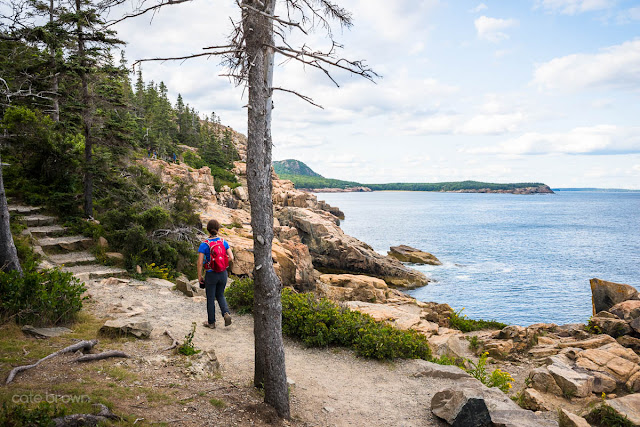 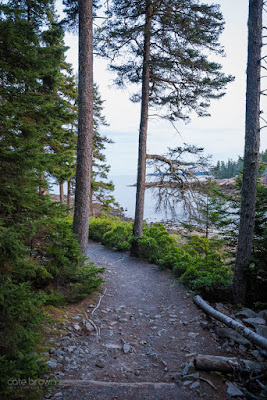 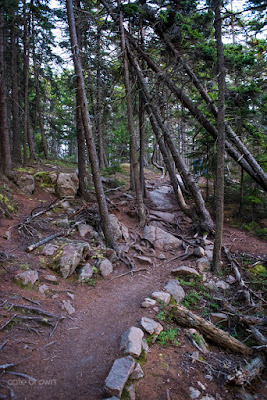