Lighthouses of RI // Lessons in Composition

I recently had the privilege of hosting my first photography tour through Local Captures, a platform built on connecting photographers and photography enthusiasts for tours and workshops throughout New England.  Local Captures focuses on utilizing tour guides with local knowledge to help travelers (and locals) make the most of new locations, while gaining confidence and technique for their photography.

My tour covers the Lighthouses of Southern Rhode Island, with the option for tackling 4 locations in an afternoon, or a more technical workshop of just 2 locations with advanced discussions on technique and composition.  Jim Schubert was my first student, and he opted for the more advanced tour so we tackled Beavertail and Castle Hill in a 4 hour workshop.  Read more about Jim's experience through his Local Captures testimonial.

It was mid-afternoon when we got underway at Beavertail Lighthouse.  The sun was out, there wasn't a cloud in the sky, and the temperature was just right.  The classic angle for Beavertail is from atop one of the western bluffs, leaving a little cove in the foreground and a lighthouse in the background.  We started there with some long exposure work and serious neutral density filters. 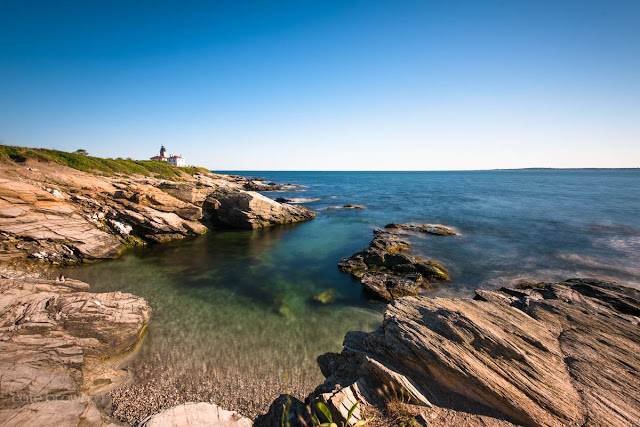 But we also wanted to experiment with composition, so we moved down the rocks towards the water and started to play.  Here's a frame by frame account of my thought process for framing and composition:


The goal of the new camera angle was for less rocks than the classic composition.  First shot - a definite no.  Way too many distracting rocks in the foreground.  Ew.  Let's try to get those out. 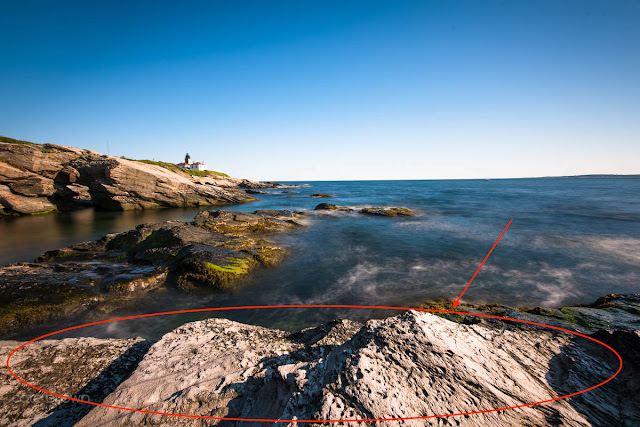 Next frame is an improvement, but there's still way too many rocks in the foreground.  The lighthouse is also too far to the left and feels unbalanced.  Let's see if there's a way to minimize the foreground rocks and move the lighthouse to the right.  In order to do that, I have to shift my camera angle more to the left. 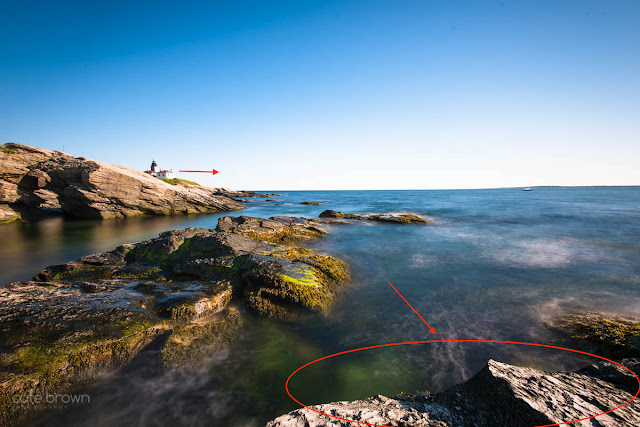 Ok, we're getting there.  The lighthouse is in a better position, but I still have those pesky rocks butting into my frame!  Let's shift the camera angle up just slightly. 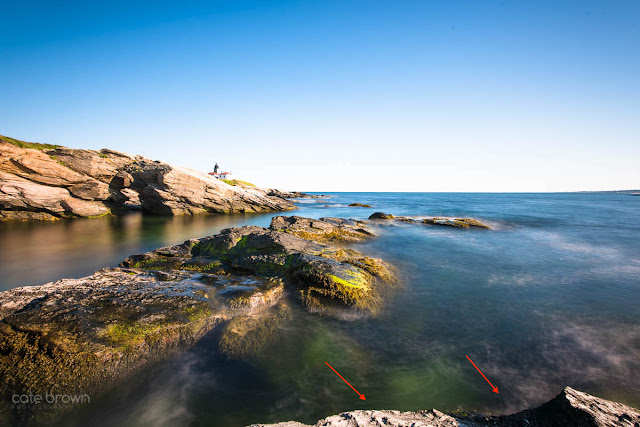 Looking better!  The horizon feels a tad low, but I know I have rocks just below my current framing, so how can I fix that?  And the seaweed covered rocks feel a little too prominent.  I'd prefer to find a way to minimize them just slightly and bring the attention to the lighthouse a little bit more. 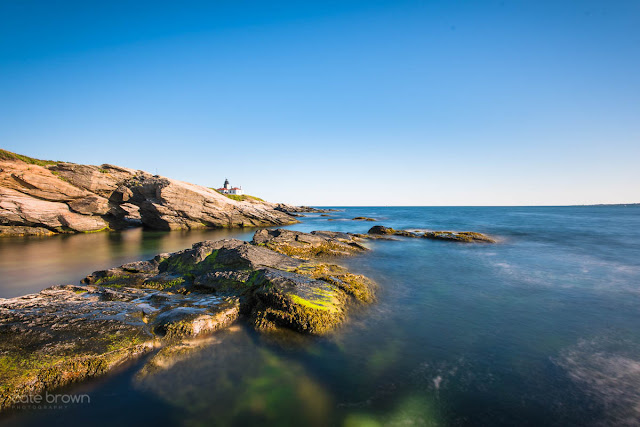 I moved further towards the waterline to my right, and aimed back at the lighthouse.  This minimized those mid-ground rocks a bit, brought the lighthouse out from behind some of the bluffs, and now it's just a matter of fixing those rocks at the edge of the frame again.  Bringing the camera angle up a bit would drop the horizon again, so the other option is adding a touch of zoom. 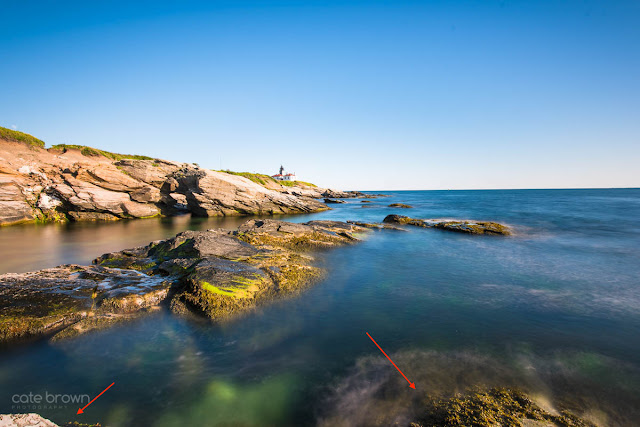 Ta-da!  Final composition.  While I'm not sure I prefer this composition to the classic Beavertail angle, it's at least something a bit different. 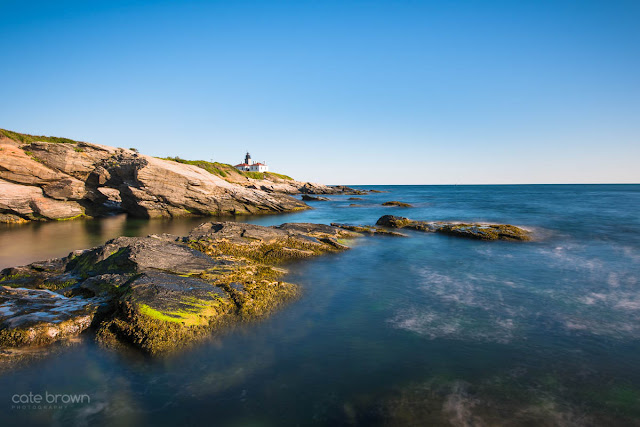 We also tried the angle from the very tip of Beavertail, looking back at the lighthouse.  We worked on finding the right balance of foreground rocks to lighthouse, while utilizing the natural leading lines from the rock striations.

There wasn't as much flexibility to play with composition from this spot, since the rocks are more precarious, and you can easily get sprayed or washed away from incoming surf.  Luckily the swell was down for us this day, so we could photograph near the water's edge safely. 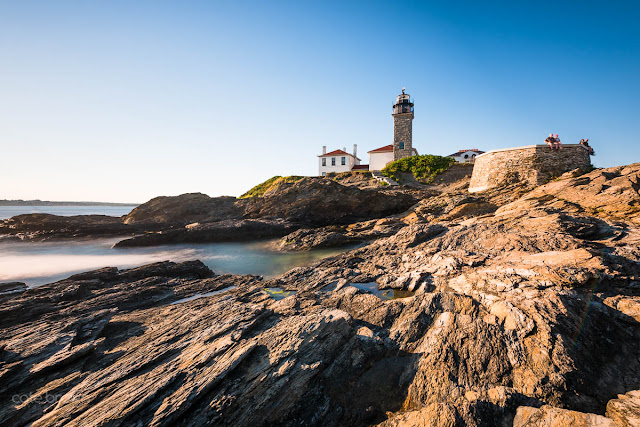 From Beavertail, we drove to Castle Hill Lighthouse in Newport.  The sun was starting to drop, and we were getting close to that golden hour before sunset.  Again, we started with one of the classic composition for this lighthouse, down by the water's edge looking back towards Castle Hill and Newport Harbor.  If you frame it just right, you can see the Newport Bridge in the background.  A mid-range or telephoto lens can achieve a better composition if you want the bridge to be more prominent, but I was just focusing on the lighthouse as a landscape, so I stuck with my wide angle zoom.

This composition can be tricky depending on the tide.  If the tide is too high, it's almost impossible to see the bridge from behind the rocks.  And if you're standing at the water's edge but too close to Castle Hill Light, there are a few tall rocks that might obscure the lighthouse.

I found my goldilocks composition, and just stayed there until the sun went down.  I purposefully brought the rocks from the bottom left corner of my frame up towards the lighthouse, again utilizing the natural and strong leading lines from the rocks to bring the viewer up and into the frame.

The light quickly transitioned from golden, to peach, to pink, to purple, as the sun sank below the horizon. As soon as you get within golden hour, the light starts to change in seconds instead of minutes.  You have to start anticipating what your exposure needs will be by the end of your exposure, because you won't have time to make adjustments after your first exposure is done.  So if it's within minutes of sunset, and you calculate for a perfect exposure at 20 seconds, you might want to shoot at 30 seconds anyway, because by the time your exposure is finished you'll already need more light to compensate for the quickly sinking sun!  It changes just that fast. 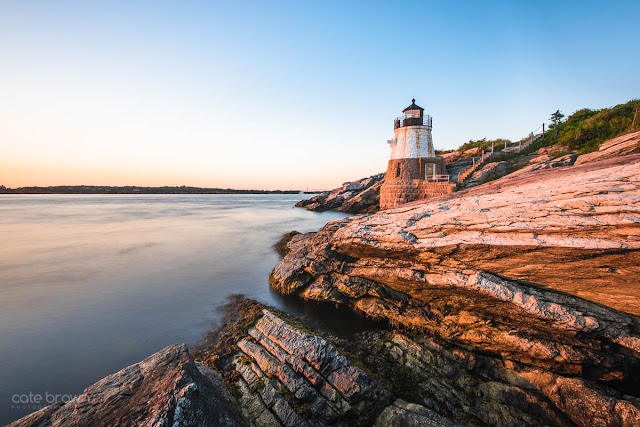 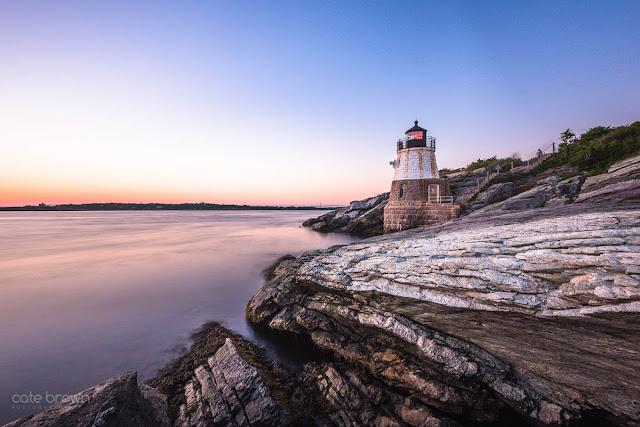 Before we called it quits, we moved closer to the lighthouse where the bluffs get steep and there's a small inlet of water.  Here's my frame by frame as I composed my final composition:

First angle - meh.  I doesn't feel too captivating.  The lighthouse could be bigger, and there's way too much rock on the bottom left.  Things just feel unbalance.  Let's move closer to get rid of some of the foreground rocks, and the camera angle more to the right to balance it out. 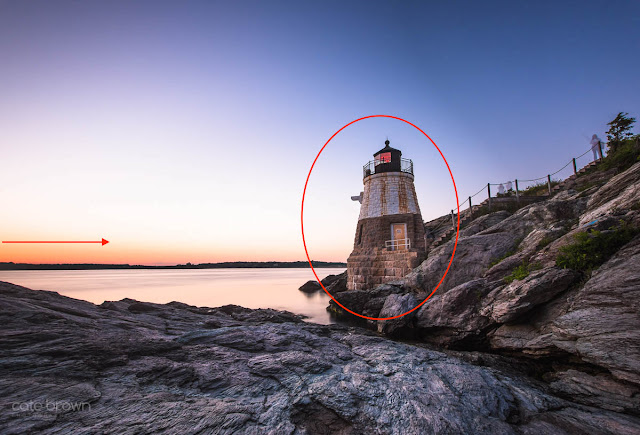 Second angle - I'm not sure if it feels any more balanced.  The horizon on the left feels low (even though it's perfectly level, the optics don't feel balanced)  The lighthouse is JUST off-center, so I wonder if centering it perfectly will be better.  And this dark patch on the bottom is just breaking the frame, and drawing attention down and away.  I want to hold the viewer in the frame, so if there's any way to frame that dark patch with lighter rock, it might just help hold everything together. 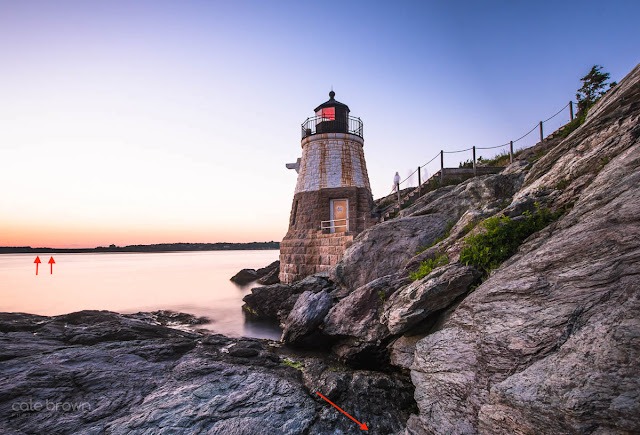 And voila!  I over-compensated the bubble level by a few degrees to make the horizon look and feel level.  A perfectly centered lighthouse feels better, despite the left hand horizon being empty.  Framing the bottom dark patch with some lighter rocks helps hold everything together, and now it feels like all the rocks are sweeping in towards the lighthouse with strong leading lines. 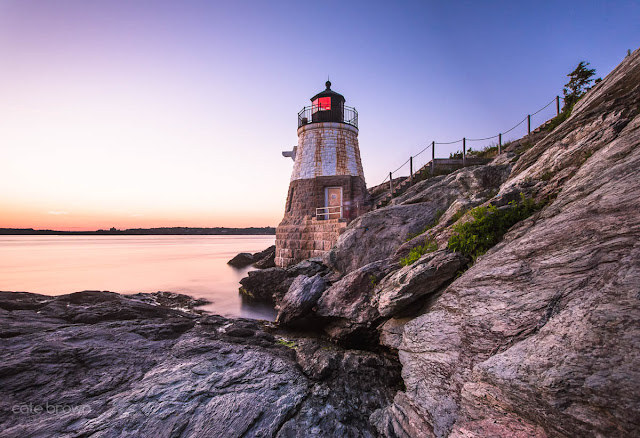 We wrapped up the lighthouse tour with some Q&A, and it seems Jim had a terrific time!  If you'd like to book a tour, please visit Local Captures