We woke bright and early at the campsite in Wright's Beach to the sounds of ocean waves and children playing.  Our tent was nestled in a small patch of pine needles and leaves beneath tall bushes, and just around our cluster of bushes was a wide open beach and crashing waves.  It was cooler than in Alameda, and the sky was overcast, but it was refreshing to be by the ocean.  The camp was full of families in RVs on their own road trips.  We were the only tent in the whole place. 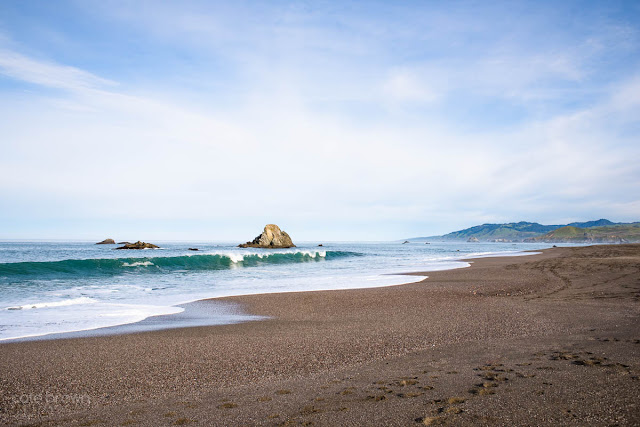 By 9:30am we departed, and continued our way up Highway 1.  Today we were exploring the Sonoma Coast, and by the end of the trip this had been my favorite stretch of highway!  The road was winding.  We were hugging the side of steep hills (or were they tall enough to be considered mountains?), and to our left was a plunging drop straight to the sea below.  Small pull-offs for allowing traffic to pass doubled as scenic overlooks, and we stopped to take in the view.

Civilization became more and more sparse, and as we passed through Jenner we found pockets of small towns.  The view became more wooded opening to a wide field of boulders as we drove by Salt Point State Park, which we would end up stopping at on our way back home.  Past Point Arena we came to our first scheduled destination in the trio of state parks including Van Damme, Mendocino Headlands, and Russian Gulch. 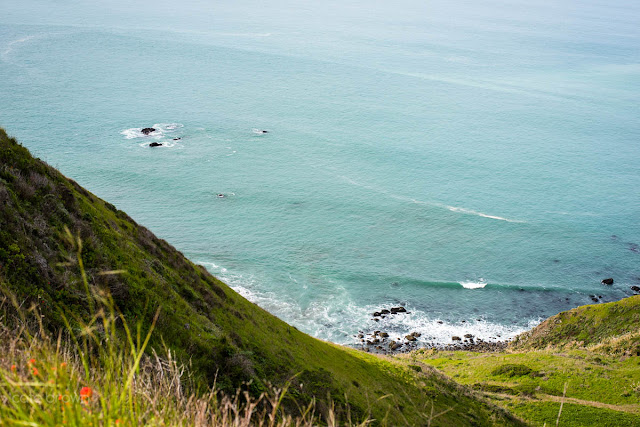 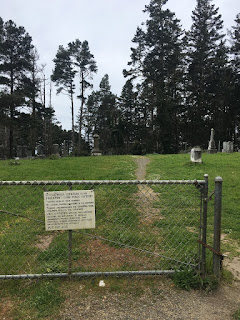 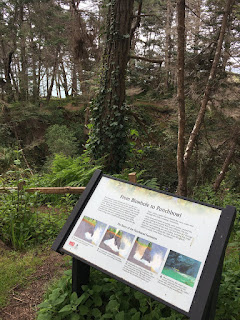 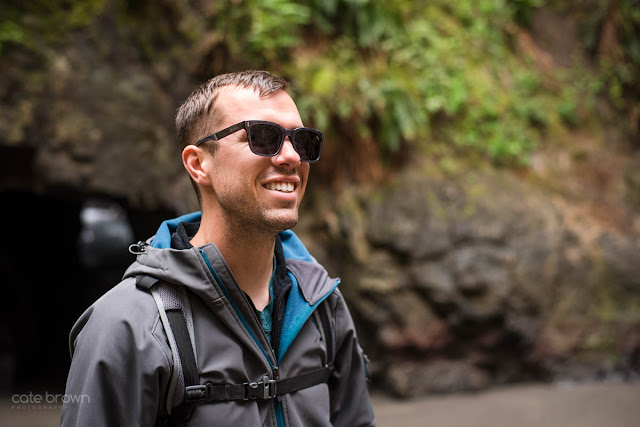 Just across from the entrance to Van Damme State Park was a small cemetery and short trail to Little River Blowhole, perhaps the highlight of the trip.  This blowhole had become a sinkhole, or "punchbowl", after years of erosion.  Climbing into the punchbowl is not advised since it's an actively eroding area, but after carefully inspecting the unofficial trail down where people had fastened a few ropes, we were confident we could safely make the climb down and back up.  We scrambled down the mud to the bottom about 40ft below, and it was well worth it!

The bottom of the bowl was eerily calm compared to the view of destruction from above.  It was almost dead low tide so we were able to walk a few paces into the cave carved out by the water all that time ago.  We stood in awe, listening to the ocean swirling and feeling the cave reverberate from the wave action at the cave mouth.  It was a short exploration but a wonderful insight into some of the incredible natural formations of the California coast.

We stopped in for park maps in Van Damme, with the intention of continuing to Russian Gulch, but we could not help but admire the rocky headlands of Mendocino.  We decided to make an unscheduled stop and explore! 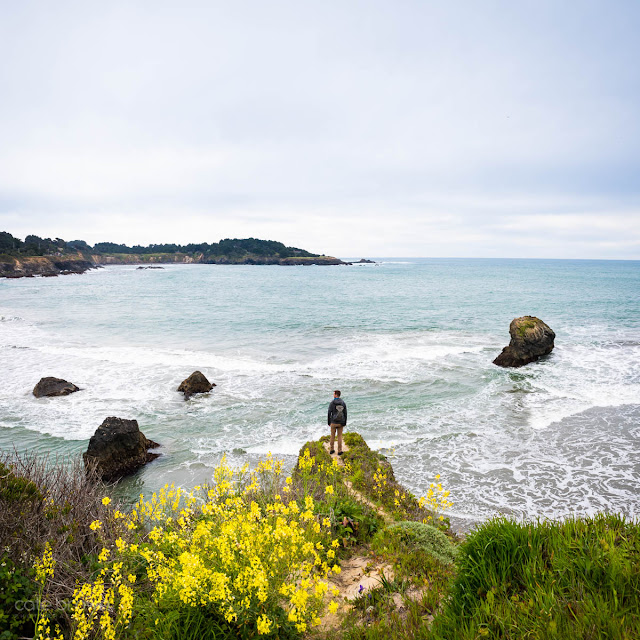 The weather was becomingly increasingly cloudy, and the wind was beginning to pick up.  It felt like we were somewhere in the North Atlantic, not the sunshine state!  We parked in the small town of Mendocino, and began walking through wide fields of green grass and yellow flowers.  We followed the footpath to the edge of the bluffs, looking south and out to sea, and then further to Big River Beach.

Stairs brought us down off the bluffs to the sand, where the beach at the river mouth was completely covered in driftwood and fallen trees.  We were well protected from the wind at this spot, and explored the driftwood, some even taller than ourselves!

We only stayed for about an hour, but it certainly made both our lists for a spot well-worth seeing and revisiting again in the future!  A few minutes up the road we reached Russian Gulch State Park, for a waterfall trail through a real-life Fern Gully. 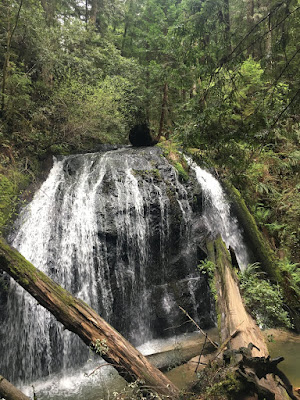 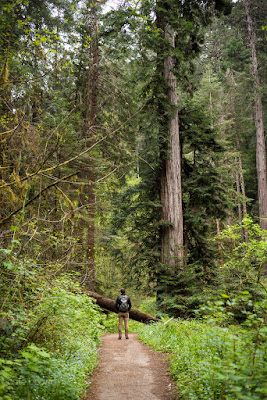 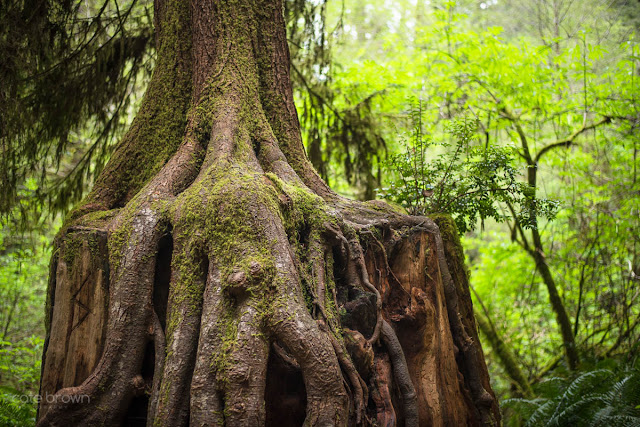 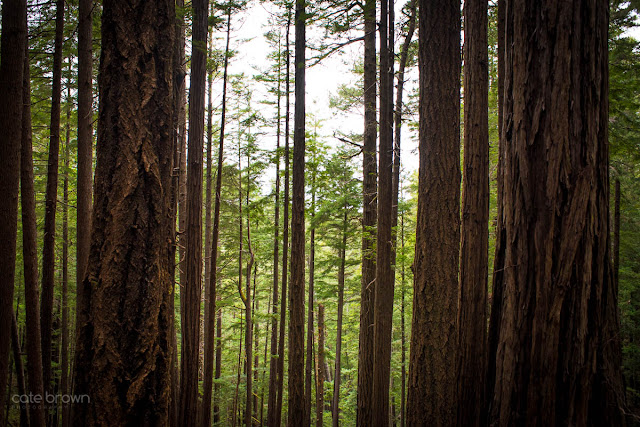 After the blustery cool gray atmosphere of the headlands, Russian Gulch was quiet and subdued.  To reach the trailhead, we drove through the park past campgrounds nestled at the base of the gully, with rising greenery and redwoods on either side.  The trail was paved for about a mile, allowing bikes to enjoy the park up until the picnic area where the trail splits and climbs in just about all directions.  We continued to the waterfall, climbing over a few fallen trees from the winter storms as we went, and then took the waterfall loop up and around the falls to the gully ridge on the south.  Aside from a few bugs and about a dozen banana slugs, there were no signs of wildlife.  Barely a bird song, no chipmunks... just the gentle sounds of water running throughout the gulch.  There was a feeling of a place long forgotten, continuing on quietly in this little part of the world, disturbed only by rainfall and the quiet footsteps of visitors like ourselves.

It was 5:30pm by the time we got back to the car.  We had two hours of daylight left, and decided to continue north and explore Glass Beach at Fort Bragg before heading to Mackerricher State Park for another night of tent camping. 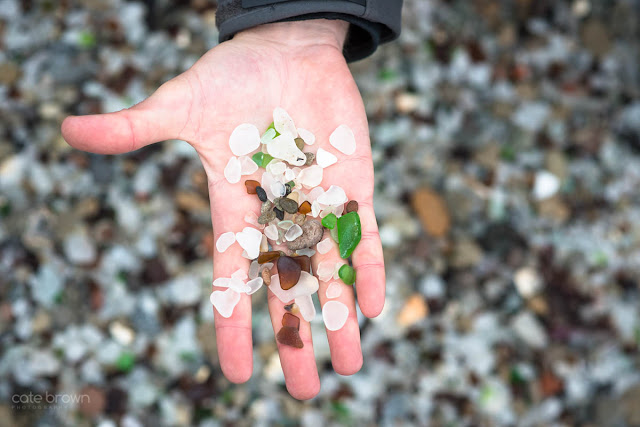 Glass Beach has a unique history.  Decades ago it was the municipal dump for the town of Fort Bragg.  There are old historical photos of cars and refrigerators and tires all piled up in a little rocky nook of the Noyo Headlands.  It has since been cleaned up, but you can still find the occasional rusty bit of iron something revealed from tidal erosion.  Glass Beach is all that remains of the dump, and is a beach made entirely of seaglass!

I almost didn't believe it until we climbed down to have a look up close.  From the path it looks like another other beach with perhaps larger grit sand and bright pebbles.  But it was truly a remarkable thing to witness when you stick your hand in the "sand" and pull up nothing but seaglass. Apparently the layer of glass has been incredibly diminished from years of tourists taking mementos home, but if this was just a percentage of what was originally here, I was still astounded!

As the sun started to set we made our way north just a couple more miles to MacKerricher State Park where we stayed in a much quieter campground for the night.  Day 2:  Complete