We woke up to sprinkles of rain and sunshowers.  That forecast from the beginning of the week was catching up to us.  What had originally looked like a day or so of rain we could hike through was taking a turn for the worse.

The forecast had increased to 3" of rain over the next couple of days, mostly overnight, with 30mph winds gusting to gale force of 50mph.  The plan had been to continue north to the King Range Wilderness, driving around the mountains to the north side where we could hike the Lost Coast Trail along the beach to Punta Gorda Lighthouse.  From there we would do the southern end of Redwoods National Park before camping for the night.  The Lost Coast Trail was one of my most anticipated stops of the trip, and Redwood National was one of Brad's, but we both decided the forecast was just too severe to tent camp for the next two nights.  So we came up with a last minute contingency before leaving MacKerricher. 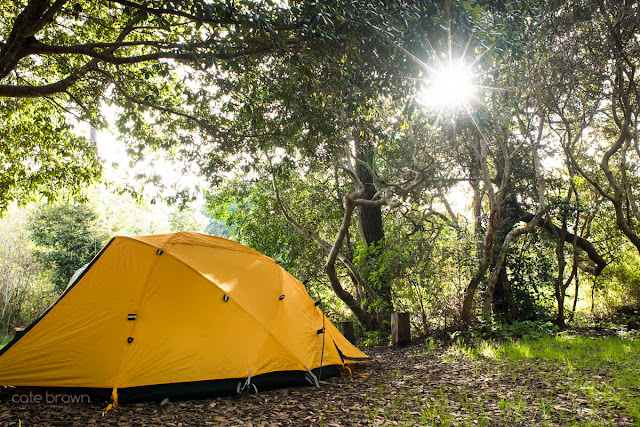 We thought about heading east towards Tahoe, where there was plenty of lake hiking and trails.  But Tahoe had already received record snowfall, even just the week prior several more inches had been added.  We would have to cross some mountains to get there and we didn't have tire chains.  Well... that idea was out.

We thought about going back towards Mendocino and Salt Point State Park, but there would still be lots of rain and camping would be limited with the upcoming weekend.  Sparse populations around there meant few hotel options.  So, that idea was out.

Our final decision was to go inland and explore Humboldt State Park where we could drive the Avenue of the Giants and still experience the redwood.  From there we could travel to Eureka for a hotel and save ourself from drowning in the tent overnight.  It was decided and we left camp by 9am.

Just 20 minutes out of camp we already wanted to stop.  A little beach with a shark-fin shaped rock caught our eye.  Then a little while later we found a beautiful overlook with a wide view of the incoming storm, pushing perfect waves up the coast.  We stopped to hike down the meadow to the headland, and watch the waves come in before continuing on. 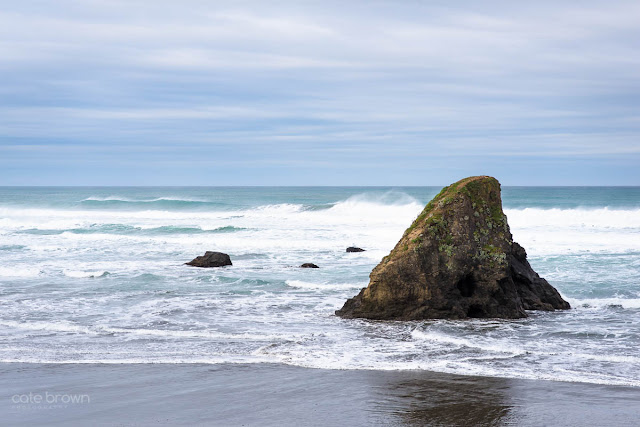 After almost three hours of driving through mountains, along turquoise rivers, across abandoned farmlands, back tracking from mudslides and detours, we finally reached redwood country. 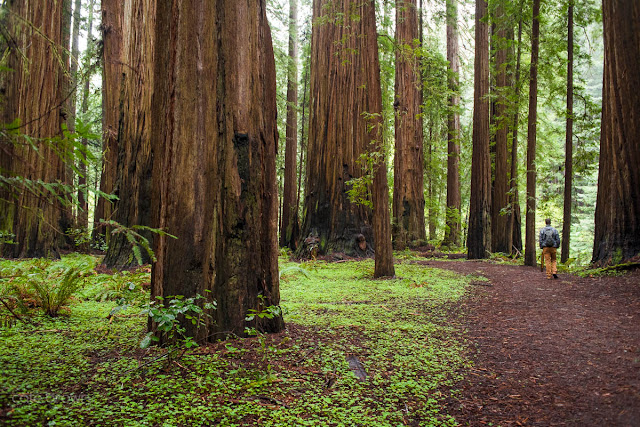 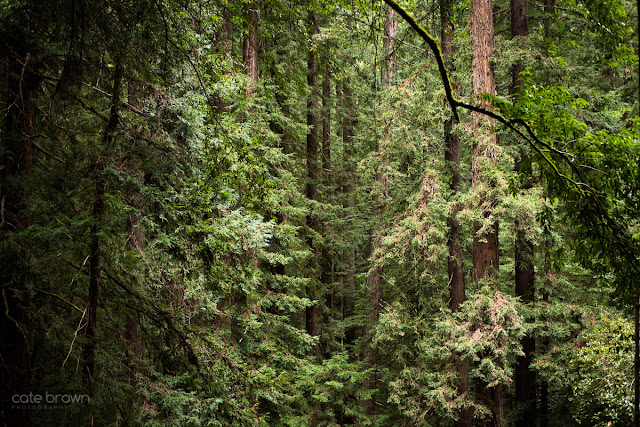 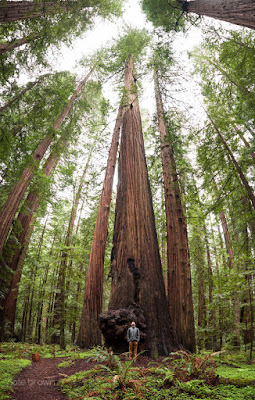 These stops were brief but provided quiet walks among the redwoods.  With each grove, the trails and trees improved in their splendor.  The hikes were easy flat walking trails, but they provided an incredible intimate experience of the redwoods.

Each of these groves had been preserved from the efforts of just a few individuals around the 1900s–1920s, some who were the founders of the preservation group Save the Redwoods League.  Rockefeller Loop in particular was preserved from a $1 million donation from John D Rockefeller after he was so impressed with the symmetry and grandeur of the redwoods.  As each of these small pockets of trees became protected from logging, the League's persistence for more preservation eventually became Humboldt State Park.  The Avenue of the Giants is a 32 mile stretch of highway through the Humboldt area where every few hundred yards you can pull off to short walking trails, making it the easiest way for those driving by car to still experience the sequoias.

Trees were scarred from the wildfires that tore through California in 2008.  Some of the areas we explored had seen tree falls from the winter storms that plagued most of state.  But there was still a sense of quiet reverence from all living things who stood in the presence of these giants.  They were majestic red sentinels silently standing guard over the last places on earth where magic can still be found.

After a couple of hours exploring Humboldt we made our way northwest towards Eureka.  We found a great little independent hotel in Fortuna, the Redwood River Walk Inn, and booked it for two nights.  As the rain started to fall, we were glad we had a warm dry place to sleep for the night.  After a proper dinner at the local brewery, and a couple nice warm showers, and it was a day well spent despite the last minute detour!