I tried to go out during Hurricane Sandy to shoot, but one thing after another and no power meant I had to stay at home.  I did, however, make it out the day after Sandy had left to see some of the destruction. The Jamestown Bridge was still closed so I couldn't get over to the islands, but I did make it down to Narragansett.  Navigating around closed roads and downed trees I managed to get to Monahan's Dock just to the south of the town beach and seawall.  The beach had about a century's worth of sand removed, a crater like hole in the main parking lot, and a 15 foot section of the seawall blown out.  Utility and clean up crews were already working to remove rocks and sand from the road but there was a place to park down at Pier No. 5 at Monahan's.  The entire pier was blown to bits with asphalt ripped up and missing.  Boulders from the pier had been moved from the storm surge and there was no telling when the pier would be repaired.  You could walk on it by carefully watching your step around small rocks, boulders, wave generated potholes and even masses of seaweed, but no cars would be parking on the dock anytime soon.  It was low tide so I climbed down to the rocky beach next to the dock and set up to take some shots of a few boulders that had been removed from the side of the pier.  The tide was coming in so I was patient and waited until just the right moment when the water was flowing lightly over the rocks and swirling around them, but they were still visible amidst the water.  The surf was still rather vicious and the surf sloppy, although several locals were trying to surf the post-Sandy waves.  When I went to edit this image it was dull with muted shades of yellow and green, but I knew right away it would best represent the general mood of the town through a dark, high contrast black and white.
For any photographers who might be curious, I used Nik's Silver Efex Pro for the first time and have to say I loved it!  Converting to black and white is just half the battle, but a lot of control is lost when editing in Lightroom where general and global adjustments are made.  Nik's control points were reminiscent of targeted dodging and burning from darkroom days, which I sorely miss.  They also had a good collection of built-in presets that served as a good starting point for contrast and structure (finer control of contrast on a detail level).  I highly recommend any photographer who likes to dedicate time and consideration to their images to look into Nik's collection of software.  For my fine art images, particularly ones I'm highly attached to or are thinking of creating for Limited Editions, the level of control I had over editing using Nik was astounding and a welcomed addition to my digital workflow. 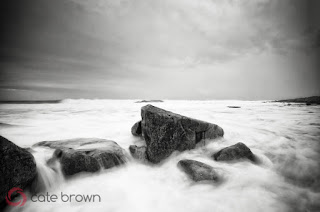