Between a heat wave and week of rain, races 5 and 6 proved to be fair weather and not so fair weather for our Wednesday Night Races.

Race 5 saw a bunch of breeze & white caps, helping to cool everyone off from the extreme heat.  The breeze filled completely by the second half of the race, and we finished second across the line with the J24 just a nose behind in third place!  The Sailing Association instructors sailed the J24 that night and probably would have placed first if they had a race chart.  Being first around the windward mark they led the fleet to the gybe but not knowing where they were going lost about 2 places to end the race in third.  It was a very fun night with beautiful sun and breeze, good cheer and good sports all around!  (I think the first photo below of Bizzy Ball is my favorite of the sailing series thusfar) 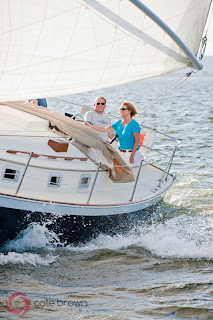 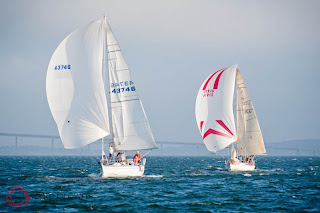 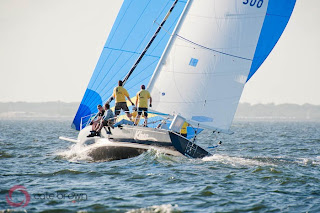 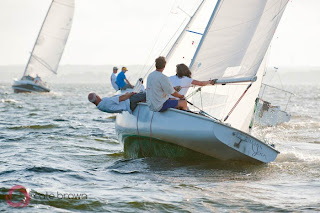 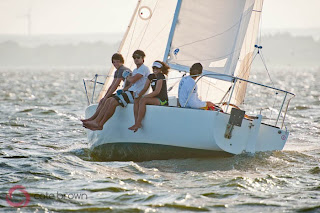 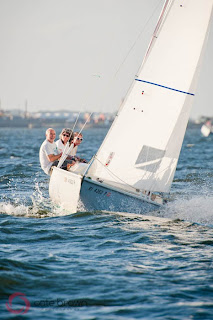 For Race 6 this past week, heavy New England Pea Soup Fog and possible of rain and thunderstorms threatened racing.  Everyone was waiting at the Yacht Club for the final word from Race Committee.  But as it neared 6 o'clock the fog just started to lift enough and we went out racing (and were given mark bearings for help).  It was a breezy, blustery evening but very few waves, which is Papa's kind of sailing weather.  We stayed right, out of the incoming tide, and were second around the windward mark!  It was quite a close call as Wings decided to overtake just as we were trying to round, and only judging boat distance by "feel", their bow came just a couple feet within our stern.  If we turned down around the windward mark immediately we would've collided, but a few moments later there was enough relief and we let out that big single sail and headed for the gybe mark.
The storm system bringing in all the fog, rain and storms was sweeping up the east coast, bringing in a strong Southwesterly shifting much further West as the race progressed.  This turned the second leg from a downwind to more of a reach.  Around the gybe mark... oh wait, that was way more like a leeward mark!  What should've been a second downwind leg was now pretty much close hauled!  We were strong on the wind and pointing right at our next mark.  Around the "leeward" mark and it was one tack to the finish.  The last leg was upwind you say?  Absolutely not.  What should've been close hauled with some strategic tacks became a reach and bear away to the finish.  So for those of you reading this who have a sense of sailing and were able to follow along, our course was much less a standard triangle and much more of an awkward disconnected diamond or open star.  Upwind, reach, close hauled, reach... that's what we ended up sailing.
And once everyone got to land there were issues with the finish times!  The boat in our fleet which crossed the line second to last, coming in from East Guam, stood as the first place boat on corrected time.  We all knew that corrected time will help the little guy in back, but something was wrong, and not just with our fleet but with others as well.  The mystery was soon solved as the race start time was inputted in the computer 2 hours too early.  After this small problem, Papa came out second on corrected time, which was the same as we finished on the water (behind Bizzy Ball).  Full results at wickfordyc.org.
So with a rather standard Race 5 and eventful Race 6, here are some other photos.  More can be seen and purchased at www.catebrownphoto.com! 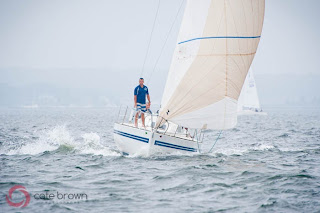 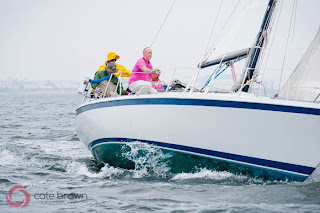 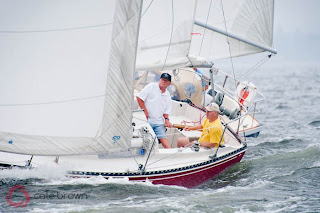 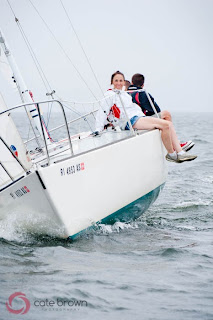