Better late than never, but here's the report from Wickford Regatta in early June! 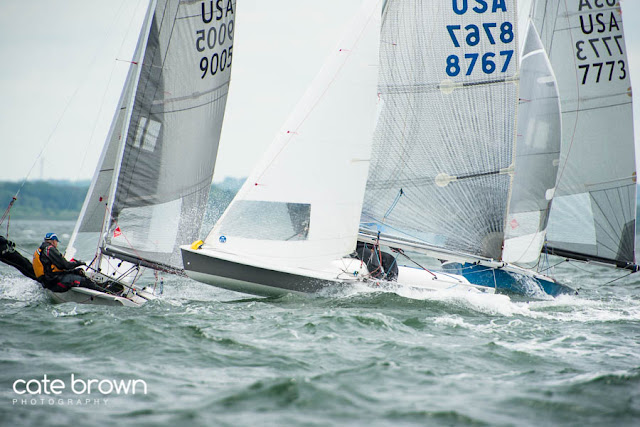 The Wickford Regatta has been revived.  First hosted in 1972, the Regatta was a premiere early season One-Design event for the Northeast hosting classes such as Lasers, 470s, 505s, and the Flying Dutchman.  After reestablishment in 2009, the event has been hosted annually by Wickford Yacht Club of North Kingstown, Rhode Island, to great success with many sailors choosing to return for multiple years of friendly competition.


The One-Design classes invited for the 2015 event included 505, F-18, I-Canoe, I-420, Laser and Laser Radial.  The largest attended fleets were Lasers with 21 boats and F-18 catamarans with 14.  The newest addition and lesser known class, the I-Canoe, had 5 boats competing on Sunday.  Sailors came from across Rhode Island, Massachusetts and Connecticut, with a few venturing to little Wickford from New York, New Hampshire, Florida, and even Ireland and Switzerland to compete.  The majority of the International 420 fleet was from Team LISOT (Long Island Sound Youth Sailing Team), a year round world-class training program for junior sailors.


Day One of racing dawned with cloudy overcast skies and a strong Northeasterly breeze, with winds at a steady 20+ knots by 11am.  Alpha Circle hosted the Lasers and 420s, while Bravo Circle raced the F-18s, 505s and I-Canoes.  Bravo Circle had the stiffer breeze and even 3ft wind swell to contend with, and saw a few early equipment failures and capsizes as competitors adjusted to the conditions.  Alpha Circle conditions were slightly gentler with light chop as competitors raced around a Trapezoid course, a popular course choice for the Wickford Regatta.

After a short day of racing, leaders included mostly local Narragansett Bay sailors such as Peter Shope of Middletown in the Laser Class, John Kirkpatrick of Sail Newport for Laser Radials, and David Clark of Warren for I-Canoes.  A few traveling sailors broke the ranks as Ravi Parent and Sam Armington from Bradenton, Florida, led the F-18 fleet and Andrew Buttner and Tracy Smith hailing from Westwood, MA, led the 505s.  After a long day of racing and heavy air conditions, the sailors were treated to dinner and drinks at Wickford Yacht Club including BBQ chicken and homemade ice cream sandwiches.


Day Two of racing started with low expectations as a light northerly in the morning and a cloudless sky indicated to many locals that the seabreeze would be light and late.  But by 11am the tides turned as a gentle 5 knot easterly filled in, switching to a solid 12-15 knot southerly seabreeze by noon.  The sunny summer conditions were perfect and with only an hour of postponement at the beach, a second full day of racing went off without a hitch.  Competition was fierce as only a few points separated the top three sailors in just about every fleet. 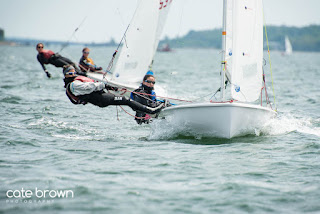 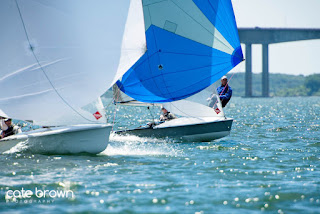 After completing a regatta total of about 7 races per class, the scores were in.  Peter Shope won first place for the Laser class with bullets in almost every race to give him an 8 race total of 8 points, an improvement from his third place finish last year.  One of the closest battles was in Laser Radials, but Christine Neville of Middletown won it in the end with an 11 point total.   Skipper Wiley Rogers and crew Jack Parkin had bullets across the board for I-420s, and finished with 7 points overall, bettering their second place finish from last year.  Andrew Buttner and Tracy Smith won the 505 class handily, also finishing with 7 points and bettering their previous year finish of third place.  The F-18s saw a tiebreaker, with Ravi Parent and Sam Arrington finishing first with 10 points, and Bob Merrick and Tyler Burd coming in second and moving up the ranks from fifth place in 2014.


It was a beautiful weekend of early June racing and we’re all looking forward more successful Wickford Regattas for the years to come. 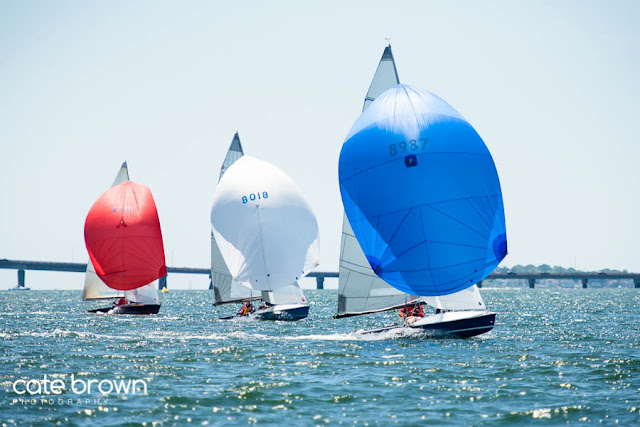 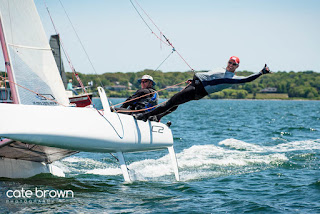 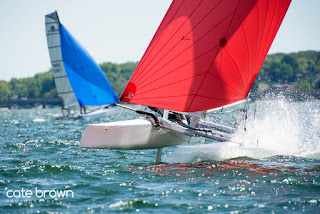 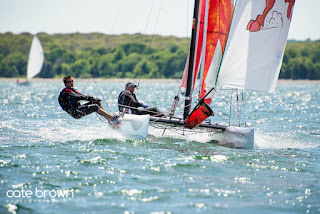