Some days you don't have a plan.  Some days you just want to go for a shoot!  Last week that's exactly what happened when Steve Cloutier (@BlockIslandSteve) called me up and asked if I wanted to tag along for some droning in Newport Harbor.  Who was I to say no!  A quick hour charge for the batteries and we were on our way.

"clear: both; text-align: left;">Logistics can be one of the hardest things about photographing sailing.  You usually need to find a boat and boat driver in order to get on the water and close to the action.  But in Newport, a lot of the smaller fleets will have their starting line just between Goat and Rose Island, making it easy to just photograph from land nearby.  Steve and I were out on a Tuesday evening, and arrived just as a group of Ensigns started their sail upwind toward Clingstone.  While they sailed south in a beautiful 7+ knots, we played around in the middle of the harbor. Apparently from where we were standing, Rose Island light is about 1 km away, and at the very end of my signal distance!  Steve, who flies a DJI Phantom 4 Pro, had a little more signal distance than my 3DR Solo, and was able to reach the PHRF racing on the far side of the harbor near Jamestown.

Before any flight, it's a good idea to know the failsafes of your aircraft.  Mine in particular will automatically return to home at an altitude of 90ft when it looses signal.  If signal is picked up midway, I can resume flight.  Other models will hover and backtrack their routes until signal is regained.  The technology has come a long way in the past 5 years, when the first consumer drone models simply drifted off into  the great beyond if they lost signal.

This flight I kept my altitude relatively low and tried a departure from my usual top-down vertical shots.  A scenic of Rose Island lit up nicely as the sun broke through a few clouds.  I noted the J/22s and Ensigns were heading back downwind so I quickly changed my battery and launched again.  I was practicing flying low near one spinnaker-ed Ensign in particular, learning to fly by my monitor.

It was a great little flight, and we will most assuredly be going again before the season is over! 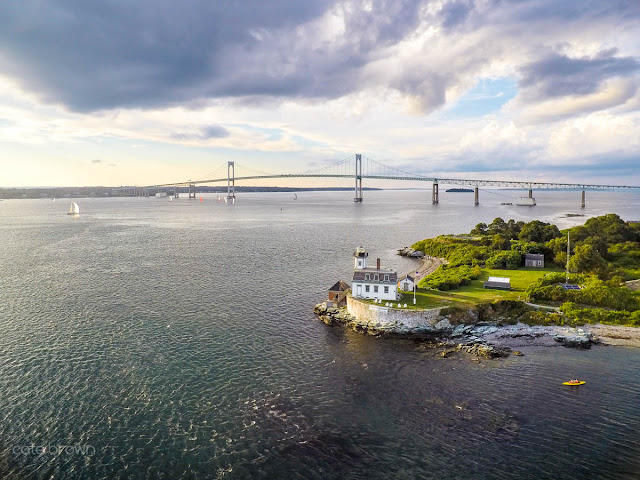 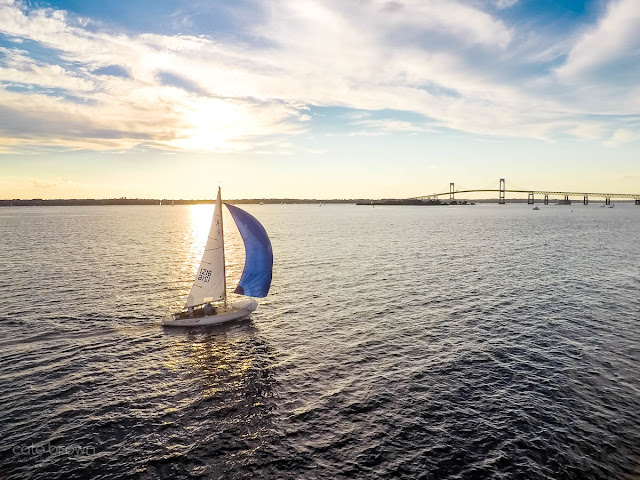