My drone had been out of commission for the better part of the past two months.  What I considered a small fix turned into a bit of a fiasco with 3DR.  Long story short, I just needed a small hardware adjustment to a loose piece in my controller, but I had to send my entire kit back as one unit, and that unit was delivered to their California location, but they could never find it to service it, and after weeks of back and forth of "What's the update on my drone?"  "To be honest, we haven't located it yet...", some complaints on my part, the finally sent me back a drone.  Not my drone, but a refurbished unit.  So I had to do some registration work with the FAA to cancel my previous drone registration and register my new unit under my name.... and phew.  I was finally read to get back to the air (6 weeks later).

I love my drone, I love what it can do, but in about 16 months 3DR has had more than just a shift or transition, but some call it a significant company decline that's left the writing on the wall.  From the launch of Solo in the spring of 2015, 3DR has gone from a very promising consumer drone for photography and videography, to an industrial self-flying unit for contractors and surveyors almost completely leaving behind R&D for the Solo program.  This very rapid shift has me wondering where 3DR's loyalties lie.  My first call to customer service this past spring went as smooth as could be, but if this last ordeal with the customer service department is any indication of the company's direction, it's a very sad day for the 3DR Solo flyers.  Articles by Forbes and UAV Coach help illustrate the difficulties 3DR has had in a competitive market against Chinese made DJI.

But some of the reasons I purchased this unit are the same reasons I am left somewhat reassured that my new investment is still more than just a paperweight.  With it's great set of pre-programmed flight patterns, I can still fly it on its current platform for some time to come.  It's capable of modular updates from the "Made for Solo" market, where third parties can continue to update hardware where 3DR may have left off.  Utilizing a GoPro camera, I'm not tied down to one camera over time.  And because 3DR is open source code, it has left the door open for any developers to continue to evolve the software.  Of course a lot of this relies on the continued enthusiasm of flyers like myself and third parties willing to take up the mantle... but there's still hope for those of us who want to find community support amongst each other if the company never gets back on its feet.

After I finally got "my" drone back I was eager to get flying again!  Then... two weeks later after bitter cold, snow, and rain, there was one day with sun, above freezing temperatures, and little to no breeze!  I was able to take a flight.

A quick drive down to East Beach in Charlestown in the middle of the afternoon was a good choice.  There wasn't much wave action but I liked the idea of a long empty stretch of beach to focus on some direct overhead compositions.  It was interesting how the color of the water was so much clearer than further up the bay, and the tire tracks in the sand from beach permit cars made for some terrific lines! We were only there for a little while, but I was able to scout out a few ideas for a return trip as well.

See everything in the new Aerial Gallery of the Image Library.  Prints and canvases available for custom order 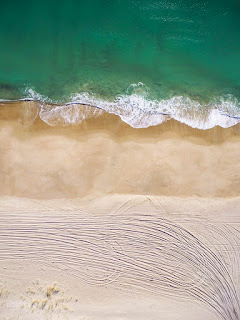 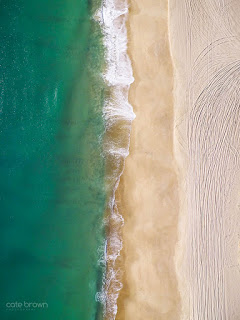 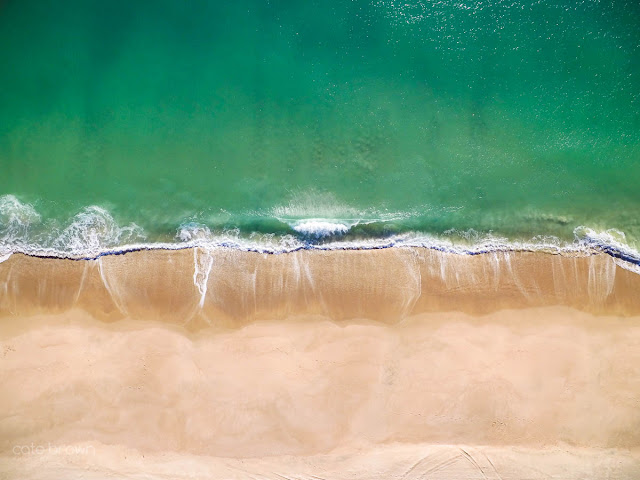