There can be unexpected obstacles for any profession, but being new to aerial drone photography there were a few things that I had not yet considered until I went for a late afternoon shoot at Moonstone Beach in South Kingstown.  This beach is at the end of a quiet dirt road and unknown to a lot of local Rhode Islanders.  It's further down Route 1 than Matunuck, and not nearly as populated or well-trodden as Green Hill and Charlestown Breachway.  But one quiet late spring day I found myself at the end of this dirt road, waving to a fisherman quietly waiting with baited hook in the marshy pond, as I strolled onto the beach.

To my left there were immediately visible NO TRESPASSING stakes sectioning off part of the beach where a structure was being reconstructed.  I had scouted out an area off to the east on Google Earth before coming to Moonstone, and walked along the waterline outside the boundary markers towards my destination.  There would be an inlet from the marsh to the ocean that would have some cool shapes and dunes to photograph from above.

I walked for almost a mile when I realized this whole area I was planning on photographing was a bird sanctuary.  There were flocks and flocks of sea birds and the area was roped off for bird nesting and habitat.  There was not enough dry sand for me to even put down my pack, as the water was creeping up with the tide.  There were far too many birds for me to even contemplate launching, for fear of colliding with them midair.  Not to mention the inherent responsibility of any photographer to respect the outdoor environment and wildlife one might encounter.  There are already horror stories of amateurs and hobbyists buying drones with the intention of trying to get as CLOSE to things like osprey or eagles nests as possible, with no regard for the wellbeing of the birds in question.  I didn't want to be one of those stories.

The sun was fading fast and I decided to rethink my plan as I walked back the way I had come.  I reached the beach were I had a few hundred square feet of open space between the roped off areas to put my backpack down and think.  I decided to launch in the last bit of daylight in this area where there was no wildlife and I had enough dry land to safely launch my drone.  I went straight up in the air, up and up to my 400 foot ceiling and took a few shots from directly overhead.

The drone does make some noise, a whirring buzzing type of noise, but at that altitude I couldn't even hear it over the sound of the waves crashing on the beach.  From that height I would be out of the way for any wildlife on the ground, and I could safely shoot without disturbing any of them.  I didn't fly long and I didn't go below 350ft or so since I knew there may still be birds nesting in this bit of marsh.  I didn't come to photograph any wildlife anyway, just the overhead landscapes.

I called it a day and came directly over my launch point before dropping altitude back to the non-sanctuary bit of beach.  Job well done.

See these and more in the Aerial Gallery 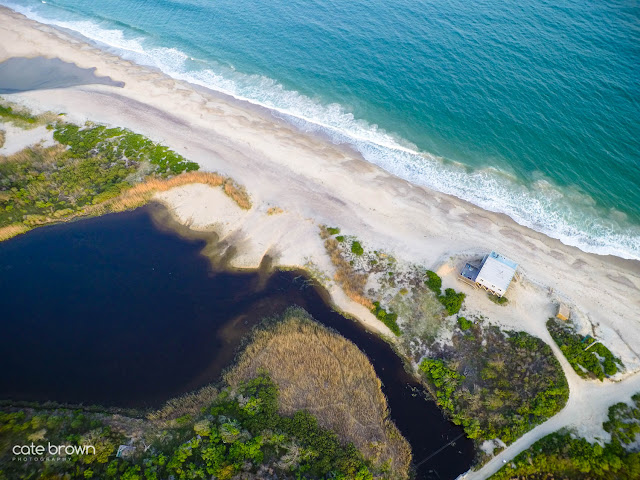 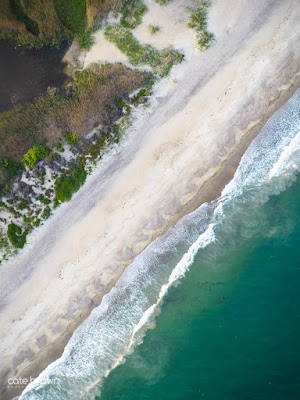 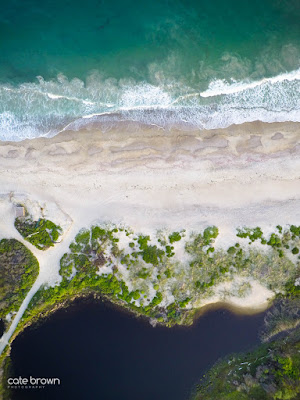