With phrases like "polar vortex" becoming common vernacular, it's not surprising that we've seen some deep freezes this winter and it's only halfway through the season.  During the beginning of the cold snap this December, I scoured Google Earth for a nearby pond with some cool shapes that might be fun to fly over.  After a bit of scouting online and by car, I found one frozen solid with just enough running water to form some very interesting shapes among the ice.
It was a Sunday, sunny, no wind (thank goodness), and a mild 20° air temperature.  The sun was starting to sink below the clouds in the late afternoon and gave everything a cool gray look as I launched for some aerial views.
In freezing temperatures like these, it's extremely important to consider battery life, especially when operating a drone.  Cold temperatures drain batteries faster, no matter what device they're in.  I'll often keep my phone and extra camera batteries in the interior pocket of my coat when DSLR shooting in the winter time.  Drones run the risk of falling out of the sky if you don't keep an eye on how fast the battery is draining.
With no wind to contend with, I would still get a good flight time out of my drone battery, but what I didn't account for was the GoPro my platform uses for a camera.  While it can draw extra battery power from the quadcopter battery, the GoPro was still struggling to stay awake and connected after only 17 minutes.  I had extra drone batteries, prepared for a second flight, but after one short fly around the GoPro wouldn't even turn back on.  It was just too cold.
But at least I got was I came for!  The ice formations and shapes were so much fun to play with, as well as the walking path that crossed the pond.  See more under Recent Work and Aerial Photography 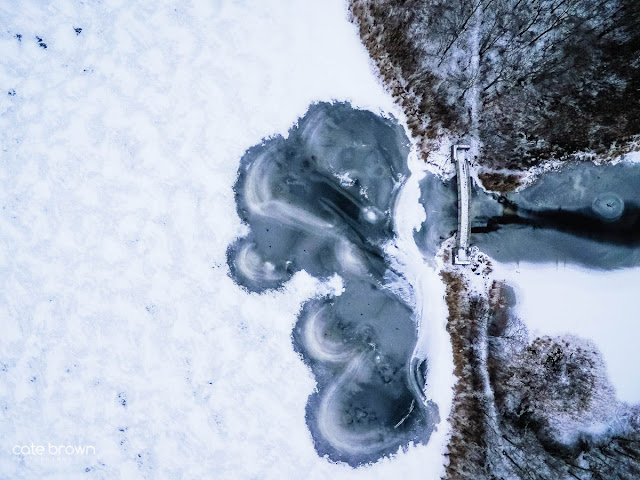 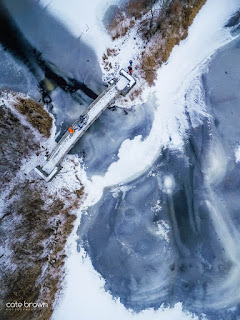 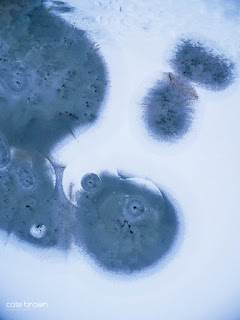