The event to signal summer's over and the school year is about to start:  Junior Race Week.  Every year, the junior sailing division of the Narragansett Bay Yachting Assoc. holds it's "junior olympic" event, welcoming all junior sailors from across the entire bay to compete in a (almost) week long event.  This event culminates an entire summer's worth of regattas and competition.  In the end, a winner is named for each class for Race Week, as well as winners for the entire summer season.
This year, Race Week was held in Bristol out of Colt State Park and the Bristol Town Beach.  Organizers try to rotate the location over the years, to be fair to all participants coming from the north end of the bay, the south county locations, Newport, and even the East Passage.  In the past, this event has been held at sites like Fort Adams in Newport, Fort Getty in Jamestown, and Goddard Park in East Greenwich.  Bristol always poses a wind issue.  Being so far north, it will often take our predictable sea breeze several extra hours to reach Bristol waters.
The images below, from the first day of racing, demonstrate this wind problem.  The first half of the day was dedicated to boat registration and delivery, with a harbor start scheduled for 1pm.  But of course, there was a postponement and we didn't leave the beach until about 2:30.  I joined the Club 420s and Lasers on Circle 1, where they would be sailing a trapezoid course.  The sea breeze hadn't quite filled, and a westerly breeze was threatening to take its place.  Between setting the course for the slight westerly, the breeze dying, going under postponement again, and resetting the course for the sea breeze that filled in at about 3:15, the one and only race for the day on Circle 1 got off at 3:40.  But when the sea breeze kicked on, it came on at about 10-15 knots.  Sailors went from glassy light air sailing to trapeze in a matter of minutes!
More images to come in Part 2 of my Race Week posts, with photos from the Opti Red White and Blue circle!  To see all of my images from Race Week, visit the NBYA Jr Race Week 2012 gallery on my website to make personal purchases of images. 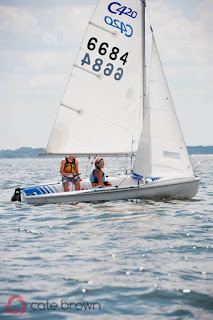 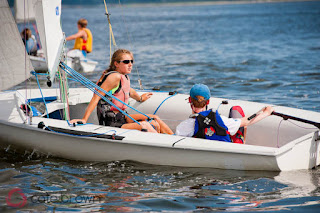 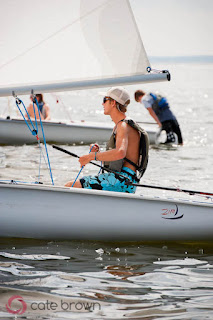 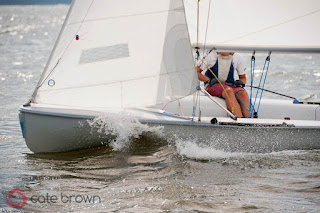 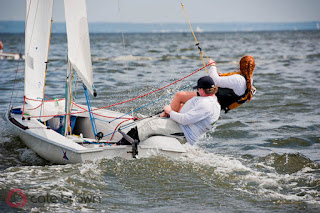 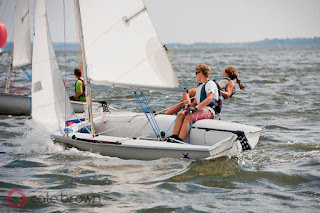 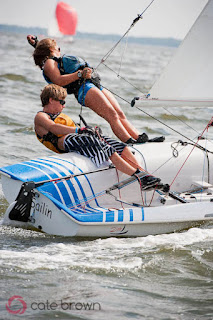 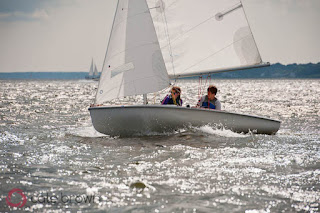